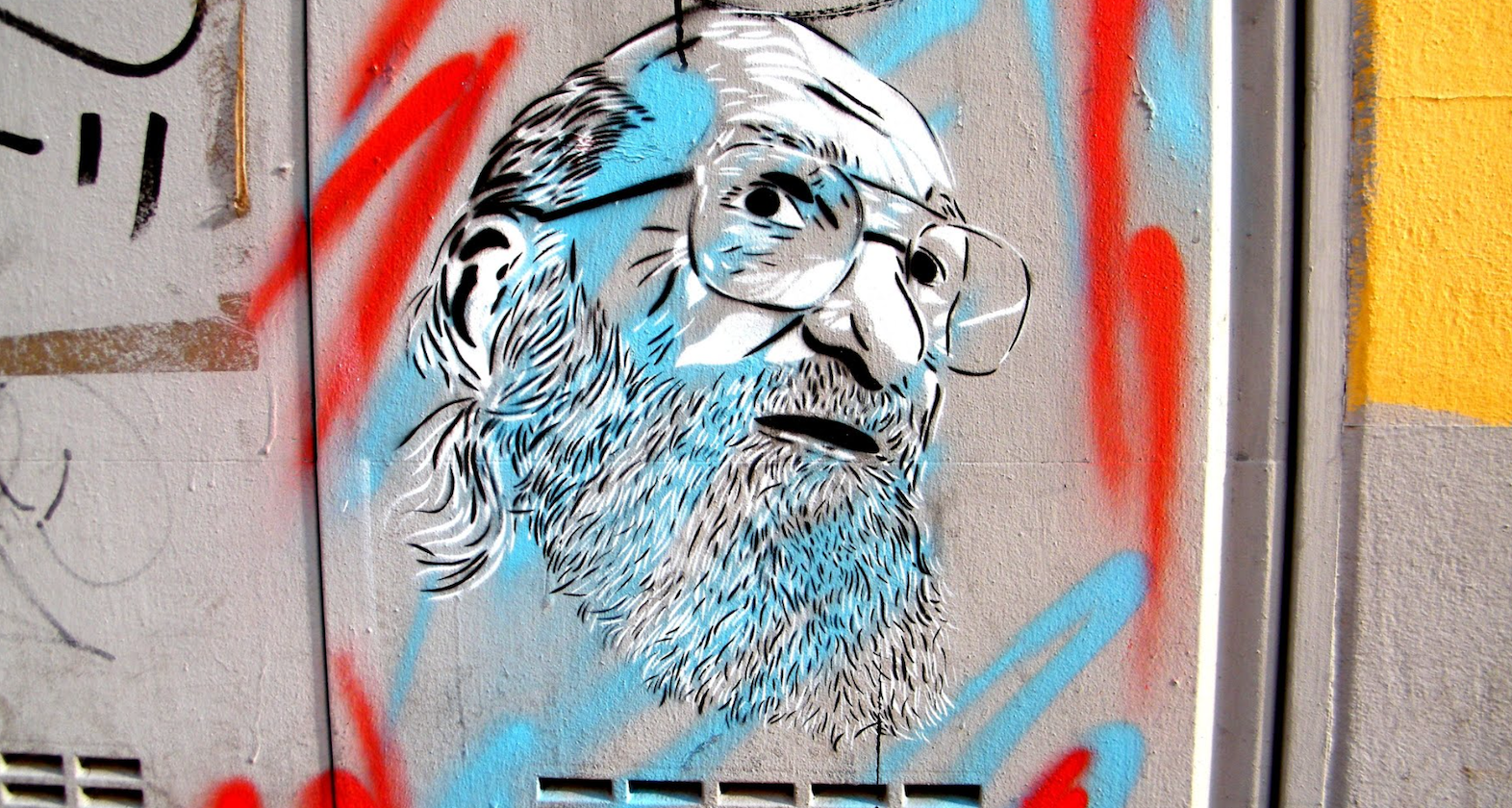 My name is Dr. Sarah Ropp and I am a postdoctoral fellow with the SNF Paideia Program and the Andrea Mitchell Center for the Study of Democracy at Penn, which stands on the ancestral lands of the Lenape people, who are still living in Pennsylvania today. This fall, I’m reading books on anti-oppression and decolonial approaches to teaching, learning, and community engagement, with a focus on the role of dialogue in these approaches.

Every week, I blog about what I’ve learned that week. I first explain some of the major ideas contained in the week’s text. Then I present reflection questions that encourage us all as students to dialogue with these ideas and link theory to our own practice and goals in scholarship, civic engagement, and dialogue.

I’m calling the series Decolonizing Dialogue — a reference both to the kinds of dialogue that enact decolonization and to the need to decolonize our dialogue practices themselves.

Many of the texts on my list contain the word “pedagogy” or “teaching” in the title — officially, most of these books were written for instructors, and if you are a teacher, I hope you find some use in this series as well! However, as bell hooks emphasizes in her own seminal work on liberatory education, Teaching to Transgress (1994), students share in the responsibility of creating an anti-oppression learning community, for their own sake and for the sake of others (9). Inviting you, students, to reflect critically on how you can participate in the decolonization of scholarship, engagement, and dialogue — without delivering mandates — is, in itself, a decolonizing move.

A decolonial ethos also urges me to acknowledge that I am not an expert in any of these topics. In writing this series, I am simply making my own learning process public and inviting you to learn and reflect alongside me. I welcome your responses, whether publicly via the comments or privately via email (sropp@sas.upenn.edu). I would love for you to suggest additional ideas and texts — maybe even contribute a guest post to the series! Thank you for reading, and thinking, along.

Paulo Freire and Dialogue as “Existential Necessity” for Liberation

Overview of Pedagogy of the Oppressed 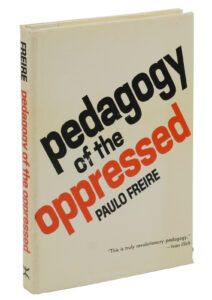 For this inaugural post, I’m rereading one of the most well-known, enduring — and at times controversial — classics of the literature of social justice: Paulo Freire’s 1970 Pedagogy of the Oppressed. Freire based this and other works of pedagogical theory on his experiences as a teacher of people living in poverty in both his native Brazil and Chile. Though he initially studied law, Freire never pursued it as a career, becoming a secondary school teacher instead. He spent years in exile after being imprisoned immediately following the 1964 military coup in Brazil, as the extreme right-wing regime found his social reform efforts (particularly mass literacy campaigns) threatening to their cause. Freire returned in 1980 to Brazil, where he continued his work until his death in 1997.

Freire’s basic position in both Pedagogy of the Oppressed and his first book, Educação como Prática da Liberdade (Education as the Practice of Freedom, 1967), is that there is no such thing as a “neutral” education. Education can either support pre-existing structures of power and domination by keeping students in a position of passive subordination, or it can work towards the dismantling of such structures by encouraging people to develop a critical awareness of oppression and, in the process, discover their own agency as subjects capable of transforming their world. Freire calls this process of becoming aware conscientização (literally “conscientization,” more frequently translated as “critical consciousness”). He argues that the means by which people develop this critical consciousness must be sustained, authentic, non-hierarchical dialogue. 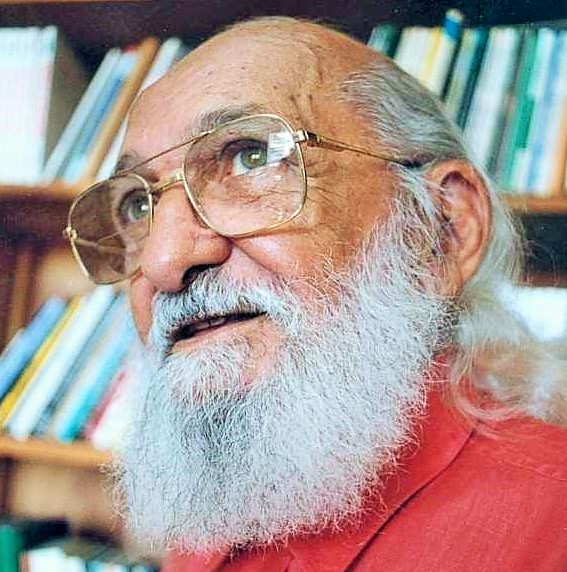 The book focuses primarily on the socioeconomic oppression of the poor and laboring classes of Latin America (which have always been disproportionately composed of darker-skinned people of Indigenous and/or African descent). Freire has rightfully been critiqued by feminist scholars for his exclusion of women in his visions of liberation. Freire can also be accused of a certain reductionism, as he offers somewhat overgeneralized characterizations of “the oppressed” and fails in the book to engage with other or intersectional forms of oppression based on race, ethnicity, gender, sexuality, dis/ability, religion, and so on.

Without discounting these shortcomings, I believe that Pedagogy of the Oppressed is still a landmark anti-oppression text with much to offer us. Its influence on education as the founding text of the critical pedagogy movement is indisputable. However, Freire’s work encourages readers of all vocations — not just students and teachers — to reflect critically and take action regarding how we live our own privilege and oppression, engage with communities, and perform dialogue across lines of difference.

Here are some of the anchoring concepts from Pedagogy of the Oppressed. For each one, I’ve suggested a few questions, inviting you to dialogue with Freire’s ideas through the lens of your own values, experiences, and goals.

Oppression: “Any situation in which ‘A’ objectively exploits ‘B’ or hinders [their] pursuit of self-affirmation as a responsible person is one of oppression,” Freire writes. “Such a situation in itself constitutes violence, even when sweetened by false generosity, because it interferes with the individual’s ontological and historical vocation to be more fully human” (37). By “self-affirmation,” Freire means a person’s belief in themself as a subject capable of meaningful thought and transformative action, rather than an object. He explains, “The oppressor consciousness tends to transform everything surrounding it into an object of domination. The earth, property, production, the creations of people, people themselves, time — everything is reduced to the status of objects at its disposal” (40). Freire emphasizes the danger of well-meaning people of privilege falling back into patterns of domination despite themselves. One example of this would be the “false generosity” of solidarity movements that retain hierarchies of power even as they extract resources, testimonies, and time from oppressed people.

Liberation: For Freire, structures of power and domination work to dehumanize both oppressors and the oppressed. By denying the fundamental interdependence and mutuality of all people, rigid systems of dependence and exploitation mean that the supposed “freedom” of one group only comes at the expense of another’s. As such, the true liberation of the oppressed is not a “gift” granted by the oppressor in the form of assimilation into the oppressor’s world, including adoption of the oppressor’s values. “The truth is that the oppressed are not ‘marginals,’ are not people living ‘outside’ society. They have always been ‘inside’ — inside the structure which made them ‘beings for others,’” writes Freire. “The solution is not to ‘integrate’ them into the structure of oppression but to transform that structure so that they can become ‘beings for themselves’” (55). This transformation ultimately liberates both oppressed people and oppressing people.

Praxis: Conscientization, or the discovery of one’s own self-worth and ability to effect change, “cannot be purely intellectual but must involve action; nor can it be limited to mere activism, but must include serious reflection; only then will it be a praxis” (47). Thus praxis = action + reflection. “Those who authentically commit themselves to the people must re-examine themselves constantly,” insists Freire. “To affirm this commitment but to consider oneself the proprietor of revolutionary wisdom — which must then be given to (or imposed on) the people — is to retain the old ways” (42-43). Importantly, this imperative to continuously re-examine one’s motivations, attitudes, and actions applies to everyone working towards liberation, including people from oppressed groups.

Dialogue: Freire positions “dialogue” as fundamentally opposed to more typical forms of address visited upon oppressed groups of people. Dialogue is not “monologue, slogans, and communiqués” (47) but rather “the encounter between [persons], mediated by the world, in order to name the world” (69). With “name the world,” Freire is referring to critical consciousness — awareness and analysis of social realities. A dialogue “mediated by the world,” meanwhile, means a dialogue that is not abstracted from what is actually happening or confined to a merely theoretical interpretation. Freire references common practices that are frequently considered or presented as “dialogues” but are really not: “Dialogue cannot be reduced to the act of one person’s ‘depositing’ ideas in another, nor can it become a simple exchange of ideas to be ‘consumed’ by the discussants. Nor yet is it a hostile, polemical argument between those who are committed neither to the naming of the world, nor to the search for truth, but rather to the imposition of their own truth” (70). For Freire, true dialogue is the key practice through which critical consciousness, and thus the rehumanization of both oppressed and oppressing peoples, is achieved. As such, it is an “existential necessity” for liberation (69).

Freire identifies five foundations for authentic dialogue, which are presented in the graphic below (also available as a PDF HERE, in a digital version HERE, and in a plain-text Google doc HERE). As you encounter Freire’s words regarding the importance of each concept, consider the following: