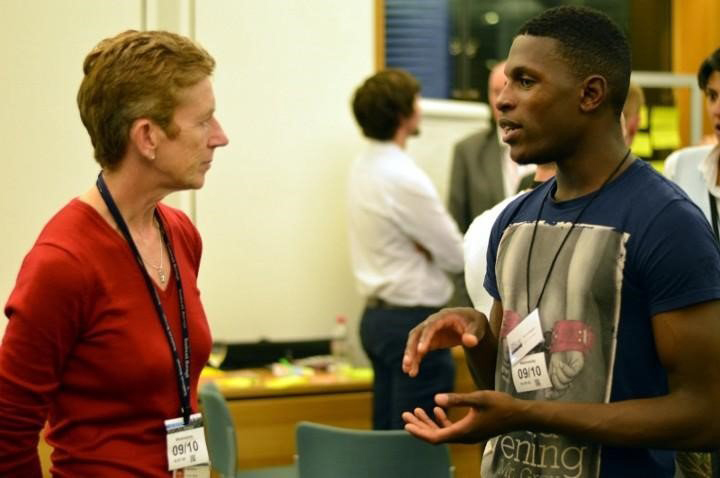 In “Caring Democracy” Joan C. Tronto describes the process of care in society in five steps: caring about, caring for, care-giving, care-receiving and caring with. Loss is experienced when governments cut its capacity to care. But the history of austerity has shown that communities can compensate for this loss by rallying together. To turn austerity into action, leaders may focus on how to help communities through the stages of loss and grief to develop community assets. Focusing only on loss risks producing a downward spiral for public services that are spread too thinly, always on edge, and done poorly. Co-producing austerity with the community, by contrast, looks like a virtuous circle to keep getting the really important things done.

Rick Cole, Santa Monica’s city manager until just recently, can’t be accused of being shortsighted. He started ringing alarm bells in 2018 in response to the threats posed by online retail, workforce automation, and mobility innovations to the economic future of his city. And yet, the city was utterly unprepared for COVID-19 and how the required emergency budget turned this beacon of progressive city management firmly away from the future. With cuts of more than 23 percent—and the loss of nearly 500 jobs—Santa Monica lost all but its most essential services now and into the immediate future.

Instead of rushing to foreclose on its future, Santa Monica might have studied what the city of Wigan, United Kingdom did. The city, with a population of 170,000 in 2012 cut 25% of its budget to cover the fallout of the financial crisis, and launched a comprehensive transformation of its entire government, working with the community to prepare for years of economic hardship.

In Wigan, the terrible reality of austerity became a community project called “The Wigan Deal.” And it wasn’t just a government program, but a fundamental realignment to make the roles of funders, service providers and service users more collaborative. The Deal nurtured community assets and promoted self reliance in the community. Its underlying philosophy was to make the community a real partner with the government and take an assets-based approach to services, promoting self-reliance. City staff and partners took up a collaborative approach to help each person unfold their potential as a capable citizen. By 2019, Wigan had successfully reduced its expenses, frozen council tax, kept services running, and improved the health and life expectancy of residents.

At the beginning of the program, Wigan, like many cities, shuttered most of its government-run community centers. But city leaders quickly realized that cost savings alone were not making the city more resilient, so they made other changes, too.

As a result, Wigan re-invested a part of the savings into service contracts with 70 community organizations. These groups stepped up to provide a much larger variety of services than were previously available. In one case, Sam Broxton, a local resident, had the idea of taking over an underused building to operate a community hub. With support of the City, he set up a community interest company and received £120,000 (~$200,000) from the City’s Wigan Deal Communities Investment Fund. Located next to a tearoom, the Hindley Library & Community Centre offers a wide range of activities such as crafts, drama, health, job programs. The center is largely staffed by volunteers.

Wigan succeeded by building close, more flexible relationships with citizens and investing in partnerships with collaborative community organizations. Being so close to the pulse of people’s needs and capabilities optimized the use of scarce resources.

This kind of co-production has helped cities as well as other public institutions weather austerity in more humane ways. Another good example is the London-based Pentonville Prison. The agency held its first prison council meeting in 2014. At the time, budgets had been cut so severely due to austerity measures that the leadership agreed to have prisoners elect representatives to work together with prison leaders to solve problems and better prioritize resources. It seemed only fair that when you cannot provide statutory services to the prison population they should be part of deciding what would be cut. Just like the people of Wigan, prisoners regained a sense of agency over their own situation and their path to rehabilitation.

Contrast this with how austerity is unraveling in Santa Monica. The city ushered in budget cuts that eliminated all non-essential budget items such as the city’s sustainability and vision zero programs, grants to community organizations and cultural events, and after school and youth programs. Without meaningful outreach, the community ended up not having a say in how city services would be restructured. Santa Monica even cut its award winning ‘Wellbeing Index’ that provided meaningful data on community needs and issues to optimize policies and services.

Santa Monica, like so many other municipalities in the past, did not learn the biggest lesson austerity has taught us to date: That embracing austerity means shifting the traditional power dynamics between service provider and users. Simply rushing into austerity will end up causing more hardship than necessary. Instead, it should involve citizens in planning the cuts and changes that any new financial and economic realities require.

As Wigan and Pentonville Prison demonstrate, austerity is rightly associated with loss, but cuts can be less painful—and even life-affirming—when they are implemented thoughtfully. What helps communities weather hardship often end up being good things that endure even when the economy picks upor all times. That’s why Seattle has reorganized around a 65-strong Department of Neighborhoods that has delivered cost savings as well as more satisfied and engaged residents.

As the pandemic tightens its grip on our country and the world, emergency budgets present significant cost savings by implementing new technology and management techniques. Yet, we know via history that ‘innovate to save’ measures are likely to be hit and miss. Without a nuanced innovation strategy—and the budget and time to experiment—such measures can lead to not just more spending, but also more hardship for people. A more robust approach to austerity is to build on what actually is proven to work. Historically, cities weather austerity best when communities come together and optimize their mutual support. The faster government opens up and allows society, businesses, and organizations to collaborate and innovate as a team, the better the outcomes will be.