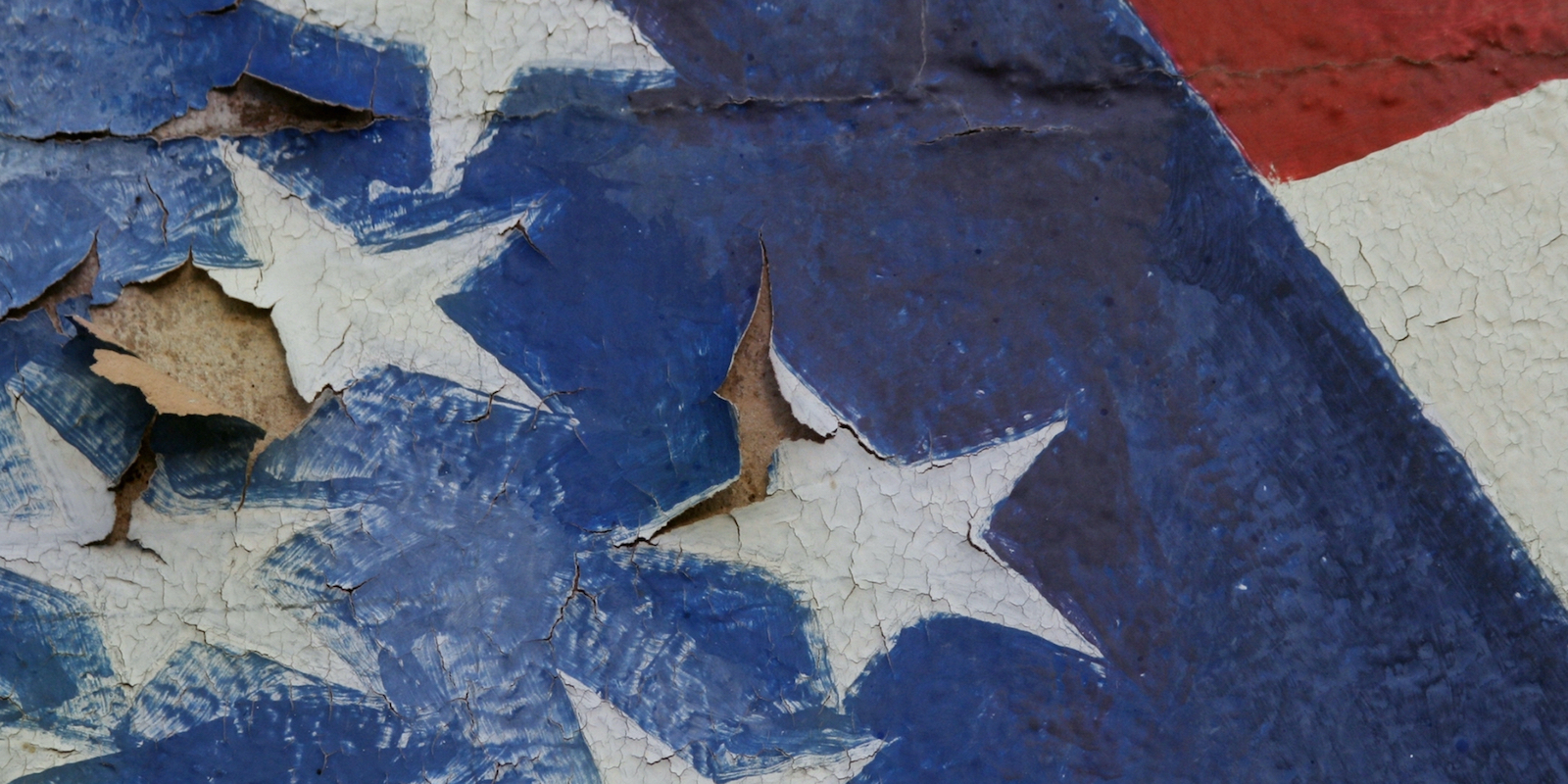 Dr. Lia Howard, student advising and wellness director of the SNF Paideia Program started the event by framing the discussion. ” January 2021 underscored that we are living in a challenging moment. Robin Wright’s article titled, ‘The Awe and Anguish of Being an American Today,’ gets at the roller coaster of emotions that we’ve been experiencing coming on the heels of a long and protracted election season with the Georgia runoff in January, the capital insurrection, the second impeachment for Trump, and then Biden’s inauguration, we find ourselves holding complicated and conflicting visions of who we are as Americans and what this moment means. Through storytelling and the sharing of frameworks, the aim is to move towards understanding and coping during this difficult moment. Rather than answers, the group will suggest postures to help approach political wellness right now.”

To set the tone for the postures, Andrew Arenge shared a story about his experience working on the NBC News election unit. “I had a really unique seat for all of the events that occurred both on January 6th and prior. If you flashback to January 5th, the day before the insurrection on the Capitol, it was the Georgia runoff race. Back in November, we weren’t able to project a winner in either of the Georgia senate races because neither candidate in any of the races was able to break that 50% threshold. Both the Warnock/Loeffler and Ossoff/Perdue races went to a runoff. That became really consequential because it determined who was going to control the senate for the next Congress.” Andrew spoke of the seriousness with which he and his colleagues took their jobs analyzing the data, being critical of it, and slowly, deliberately, and transparently reporting the results to the American public so they could trust the system. He recalls being on the phone with the control room reporting that they were able to project Ossoff had won the race in Georgia and simultaneously seeing images of rioters outside the Capitol who didn’t trust the media or didn’t trust the projections of the election desk. They didn’t trust the system. “Part of the work that we do in this process is to ensure that the American public has faith in the election system. We take our jobs really seriously. But I started reflecting on my role. What could we have done better? What could we potentially do in that moment?” This was put in sharp relief when he was in a conversation with his hairdresser, whom he has known his whole life, and who was questioning the results of the election he worked so hard to measure.  It became a moment where he, a person who often listens to the opinions of others rather than sharing his own, felt the need to speak up. 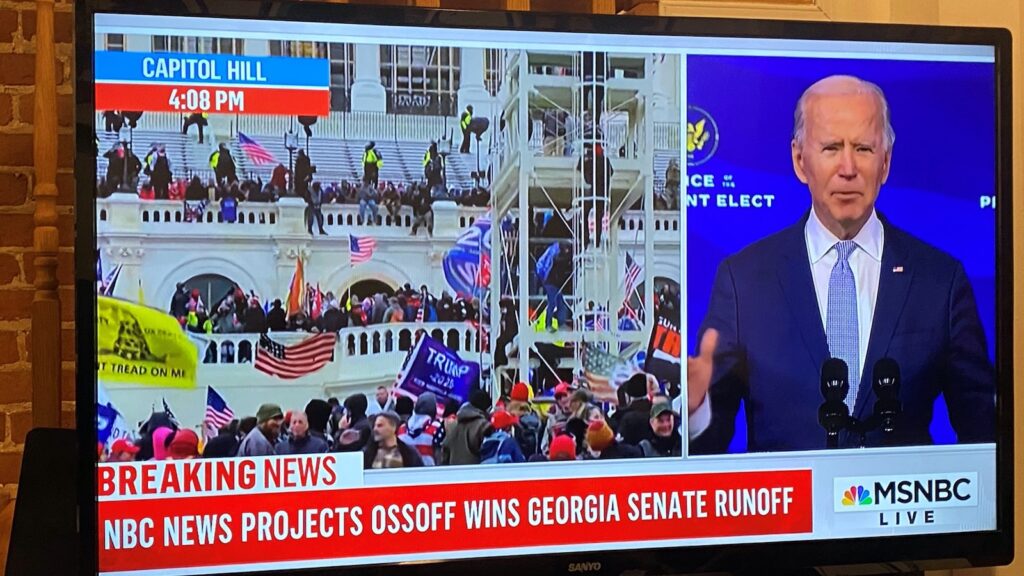 Dr. Batsi Bvunzawabaya went on to provide a framework and postures for this moment. “And to think about what it means to acknowledge what’s taken place, and the impact it’s had on each of us in an individual sense as well as a collective sense.” From a psychological, therapeutic standpoint, acknowledgment requires us to recognize our feelings, whether they be anger, fear, or blame, and make the unconscious conscious. By recognizing how we feel, we get in touch with what we need to take action rather than internalizing reactions or projecting them onto other people. Either of which may be harmful for our mental health and impede our ability to connect with others.

She next shared words from August Wilson “Confront the dark parts of yourself and work to banish them with illumination and forgiveness. Your willingness to wrestle with your demons will cause your angels to sing.” These ideas underscore the importance of realizing that acknowledgement requires some looking inside to name different feelings even if they are ones we do not like to recognize.  This leads to real growth and the ability to connect with others. 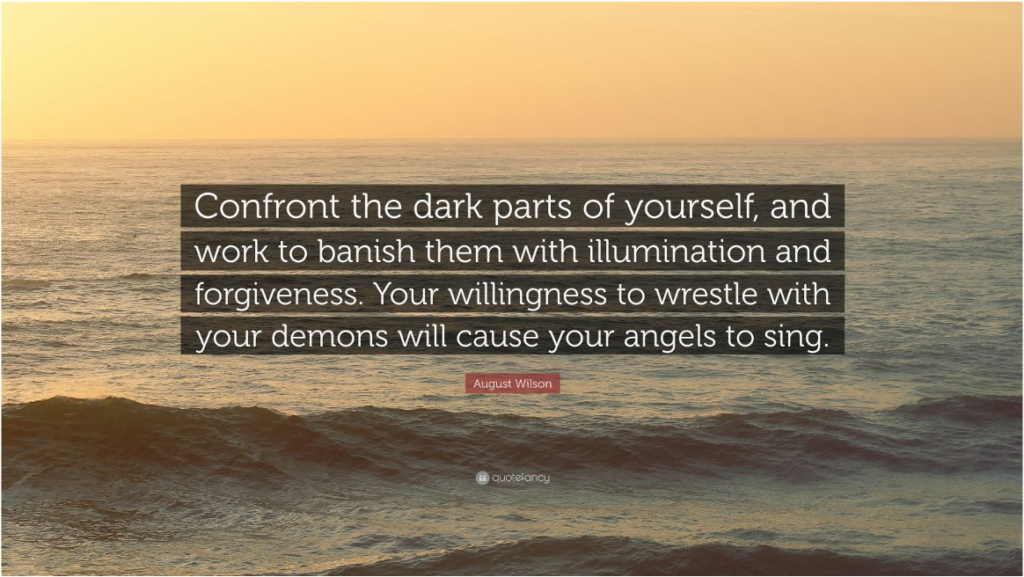 Moving onto accountability, Andrew Arenge and Sandy Vogel spoke about the collective understanding of democracy and shared values that we hold as Americans and what happens when these expectations are betrayed. 88% of Americans believe that the country is greatly divided when it comes to our most important values, this idea of what we hold to be true. When asked to think about the future, a third of the people polled said they think the country will become more divided on these important values within the next five years. Yet, people generally agree that a fair judicial system and the rule of law are important and that a democratically elected government is likewise important. These values are ones that we hold communally, even if we may define them differently.

One thing that happens often when talking about accountability is that the goal posts gets moved. We redefine accountability as we experience it. We need to define these lines of accountability for ourselves. What are the values you believe in individually that you want to make sure to hold yourself accountable in that moment, in that conversation.  This becomes a small moment of leadership.

Leadership often happens in big moments but it is also very important in these little moments, these one-on-one conversations, these moments where you’re wrestling with all of these things.~Andrew Arenge

And then there is global accountability. How will the world hold us accountable for some of the events since the election in 2020 or over the past four years? This is more of a rhetorical question but is one way to think of what collective accountability looks like.

Using the metaphor of the car, Dr. Howard asked the participants to imagine what it was like before the automobile and how this one invention brought with it many changes. The first car was invented in 1885 and started to become common in the 1920s but it wasn’t until 1967 that the Department of Transportation was formed. Seat belts weren’t made federalists law until 1968. the National Highway Traffic Safety Administration came in 1970. And car seats were made mandatory in 1985, nearly a full 100 years after the first car was invented. Cars also led to suburbanization which changed the way many Americans lived and worked.  The car also led to a greater demand for fossil fuels, influencing both our foreign policy and leading to sustainability issues.

Though the car is an invention that impacted our lives in so many different ways, it took decades for legislation to keep up with this invention.  Dr. Howard invited the audience to think about the Internet in similar ways and to think about the ways we receive information and communicate with others by adopting better “rules of the road” thinking of these as stop lights, speed limits and seatbelts.  Someday regulations may be in acted but in the meantime are there ways we can keep our health in mind as we engage with information and other people online.

Stop lights are simply having an intentional and personal plan around how you engage in information and communication. There are steps you can take in your own life to control when you decide you will engage and disengage with information, with communication on social media, to take breaks from your phone, especially before bed. Put your phone down and have a cup of tea or read a book. Or when you wake up, take a walk before reading the headlines.

For speed limits, we can think about how you are going to engage on line.  What words are you going to use and not use, what tone will you use. How will you “keep the speed limit” even if you see others speeding.  Finally think about seatbelts because accidents happen.  What will you do to protect yourself after you’ve had a negative encounter on line or read something that has disturbed you.  Can you take a walk or talk to a close friend?

Two final reminders to keep in mind when dialoguing across difference remember how complex we are and look for places you have things in common, where your ideas, experiences, and beliefs overlap, like a Venn diagram. And share your complexities with others, to avoid being put into a stacked identity that invites bias and over-simplification.  Also remember to learn from other times that we fraught in American history.  Tension can also help people to see things in new ways and lead to important changes as the Reverend Dr. Martin Luther King points out in his “Letter from Birmingham Jail.”

In Search of Political Wellness sought to provide a space for people to think about the impact of tumultuous politics on our wellness and try to develop postures that help us be attentive to our whole selves.  It asked participants to think about what acknowledgement, accountability and action looks like both as individuals and as a community as we contemplate well being.