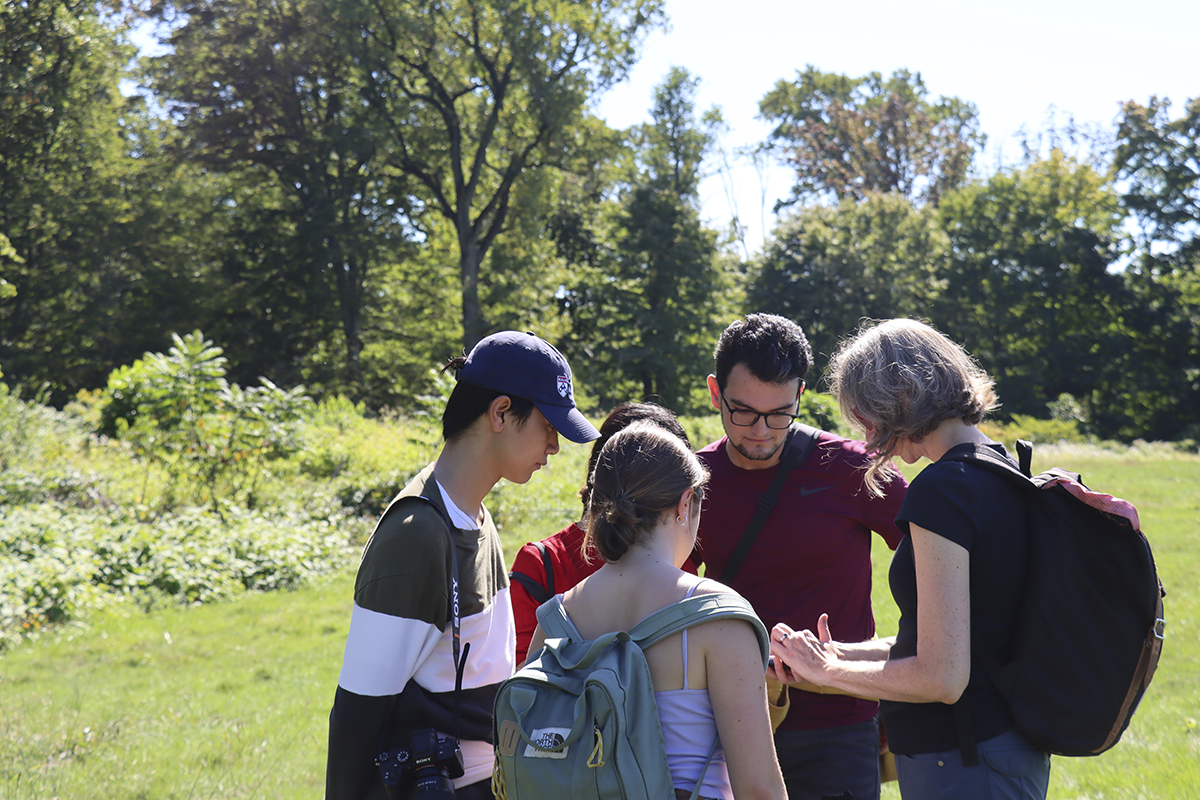 Offering an alternate activity for fall break, SNF Paideia hosted Walk Around Philadelphia, an experiential day-long event where groups of 5-6 people walked sections of the 100-mile city boundary. This was the second year SNF Paideia collaborated with artist and alum JJ Tiziou, originator of Walk Around Philadelphia, to customize his program for a Penn audience. In 2021, the event was structured as a retreat for SNF Paideia Fellows. This year, the opportunity was opened to the Penn community; a mix of Penn staff, undergraduate and graduate students were involved.

Rehana Odendaal, a fourth year joint PhD student in Education, Culture and Society (GSE) and Sociology (SAS) reflected on her relationship with the city before and after the walk. “ Originally from Cape Town, South Africa, visiting Philly over my interview weekend in 2019 was a big part of my decision to come to Penn. As a POC coming from a majority Black country to the US where there are many places that are (knowingly or not) embedded in white cultural norms and values, it felt important to me to live in a city where the racial and ethnic diversity is acknowledged, and people are able to live their authentic lives. Despite not being a practicing Muslim, the presence of mosques and immigrant cultural institutions in West Philly, made Philly seem like a city I could live in.” She then explained how Walk Around Philadelphia expanded her view of the city. “In the three and a half years I have lived in Philly, I have spent almost all my time between 50th Street and City Hall, seldom going further north than Spring Garden. Although I have consciously tried to get involved in community beyond Penn, I have relatively little experience outside my immediate neighborhood. Until Walk Around Philadelphia, I was not aware of how small Philadelphia County is vis-à-vis what I think about as the city/metro area of Philly. I realized that I do not really understand the tangible difference that these county boundaries have on people’s lives. Walking the section of the boundary that we did, helped me to realize how close parts of the city I had visited, that felt like venturing out of ‘the bubble’, were to one another.”

Khanh Linh Do is an exchange student from France majoring in Communication. She reflected on how Walk Around Philadelphia prompted reflection on boundaries. “ Being born and raised in Vietnam then spending 2 years in France for college, I’m familiar with small cities (my city in Vietnam was 73.24 mi², the one in France was 18.48 mi² and Philly is 141.7 mi²), that means I could easily walk from my place to the city center within 20 minutes. The boundaries of my old cities are hence more approachable, while Philly’s boundaries seem so far away, and, dangerous. I didn’t have a very close relationship with Philadelphia prior to the event so we can either say the walk didn’t change much or it changed my entire view of the city. I had the chance to see the industrial passages that I find fascinating and aesthetically cool, as well as beautiful nature and a more peaceful yet majestic side of the city. I still remember the strange feeling when I was standing on the bank of the Delaware, knowing that the city on the other side that I was looking at was not Philadelphia. I could see New Jersey clearly, but the Delaware is huge and has a strong current. I thought about how a boundary can be at the same time thin and unpassable.”

Expanding participants’ perspective of Philadelphia beyond the city was both an intent and effect of the experience. When asked “What was most valuable to you about the Fall Break Walk Around Philadelphia?” one anonymous respondent said, “Learning to take in the environment around me outside of the “Penn Bubble” and recognizing Philadelphia isn’t just the city.” Another participant reflected, “The experience to just exist, outside, in a new place! Hearing and seeing hidden spots in Philly and being exposed to communities, or at least the traces of communities, that exist around Philadelphia is great.”

Dr. Leah Anderson, Executive Director of the SNF Paideia Program was both heavily involved in the planning of the event as well as an active participant. With regards to the design of the program, Dr. Anderson shared, “our hope was to provide an active retreat, giving people the opportunity to move together and dialogue with each other and the city in a meaningful way.“ As a participant, she added, “I learned a lot from my fellow walkers as we shared our reactions to the city and people we encountered along the perimeter. Not only did I have my own experience of sections of Philadelphia that were new to me, but I also saw those spaces through the eyes of others, including people who grew up in other countries. This prompted wide-ranging, personal conversations on everything from our relationships with family members to bidet versus toilet paper debates.”

Reflecting on the experience, SNF Paideia Staff member Dr. Lia Howard said, “I’ve done the walk twice now, encountering two different portions of the Philadelphia perimeter.  Each one contained unexpected surprises.  Going over a train track our group suddenly came across the Heintz Nature preserve; or while walking along the Delaware River we were surprised to stumble upon Graffitti Pier. For me these treasures evoked wonder and caused me to question what I think I know about Philadelphia even though I have lived here since I was in elementary school.”

For students and staff who were looking for a unique, alternative experience during fall break, Walk Around Philadelphia offered just that. The conversation, exploration, and discovery that occurred both brought people at Penn closer together and established threads of connection with the wider Philadelphia community.