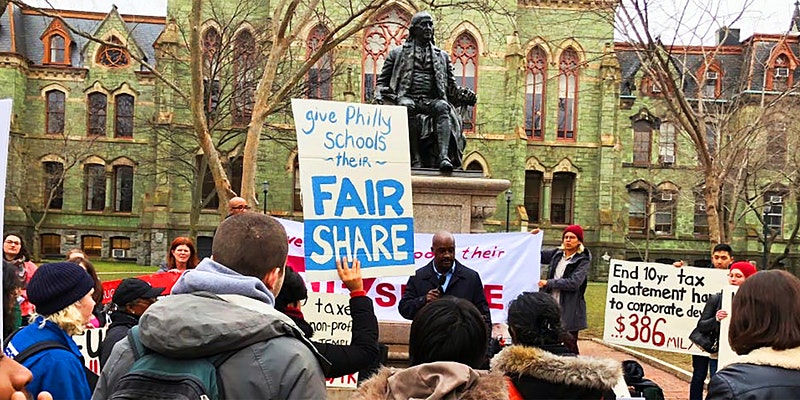 This event was co-sponsored by the SNF Paideia Program, Civic House, Penn Democrats, Gear Up Penn, and Penn AAPI Politics. Penn is the largest private property owner in Philadelphia but, as a non-profit, does not have to pay taxes. There has been mounting pressure on Penn to make payments in lieu of taxes (PILOTS). The event started off with a brief introduction by the Director of the Andrea Mitchell Center, Jeffrey Green, who discussed how this event is a way of asking what the Penn community’s responsibility is towards Philadelphia and the global community as a whole.

The event officially began with opening remarks from the four panelists: Devan Spear, the Executive Director of Philadelphia Jobs with Justice, Sarah Min, from Penn Community for Justice, Rick Krajewski, Candidate for Pennsylvania House of Representatives in the 188th district and Penn class of 2013, and Dr. Dennis Culhane, Professor and Dana and Andrew Stone Chair in Social Policy, Penn School of Social Policy and Practice. Spear began by discussing her various involvement in various efforts to call on Penn to pay PILOTS and called for the establishment of an education equity fund that will support the public-school. The remarks then moved to Min, who reiterated that Penn should pay PILOTS to assist public schools and should institutionalize police-free alternatives for public safety. Dr. Culhane provided a different perspective on PILOTS, agreeing the proposal would work as an interim measure but as payments would be discretionary, it is not a tenable long-term solution. Dr. Culhane asserted that state governors should revisit the blanket exemption given to colleges and universities for all the functions happening on campus. Finally, Krajewski spoke about the ways that West Philadelphia has suffered from divestment and gentrification and the importance of Penn adopting PILOTS in conjunction with the creation of education equity funds that could be publicly administered.

The remarks were followed by a series of questions submitted by the co-sponsors and then the general audience. Panelists were asked about the most effective means to encourage the university systemic inequities in the public education system as well as how to move Penn to pay PILOTS. Dr. Culhane emphasized the need for the state to assume much more responsibility for equalizing the inequalities across these barriers through ways such as incentivizing faculty engagement with school districts. Min extended an invitation to join Penn Community for Justice as a way to get creative about ways to motivate Penn regarding PILOTS while Spear brought attention to the pledge for Penn affiliates which states that they will not make donations until PILOT contributions are made. Krajewski echoed the sentiment of fellow panelists by saying that it is possible to create public awareness until Penn is moved to respond.

The event ended with reminders from the panelists regarding the various resources that exist for those interested in the PILOTS cause and an important reminder to vote and support state legislative action around the Philadelphia area.