Overview of Free Speech on Campus 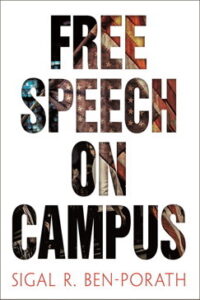 (For an introduction to this blog series on anti-oppression approaches to dialogue, see here for other entries in the series, see “Sarah’s Content” on this page.)

Sigal Ben-Porath is Professor of Education in the Literacy, Cultural Studies, and International Education Division of the Graduate School of Education (GSE) at the University of Pennsylvania. She also teaches in the Political Science and Philosophy Departments at Penn, where she has been teaching since 2004. Ben-Porath is interested in civic education and the ways in which schools and universities can uphold democracy, in part through the practice of democratic values on campus and in the classroom.

Free Speech on Campus is written in response to a series of highly publicized incidents on contemporary higher education campuses across the U.S. related to tensions over freedom of speech, including (among others) controversial invited speakers, hate speech, and indictments of administration and faculty for failing to adequately protect vulnerable students from the real harm of the latter and the perceived or feared harm of the former. It also rises out of the everyday challenges Ben-Porath faced while serving as chair of Penn’s Committee on Open Expression. In the short video below, Ben-Porath introduces the book in her own words:

As Ben-Porath indicates in the video, the book is structured around the concept of inclusive freedom, a framework for rethinking the relationship between inclusion and free speech. Ben-Porath notes in Free Speech on Campus that an unhelpful (and, in her view, false) binary distinction has been drawn between the responsibility to foster diversity, equity, and inclusion on college campuses on the one hand and the protection of First Amendment rights on the other hand. That is, it is assumed that to protect students from dehumanizing rhetoric and biased claims targeting their marginalized identities and experiences is necessarily to restrict freedom of speech. Meanwhile, it is assumed that to defend freedom of speech is necessarily to disregard or minimize the ways in which speech can increase in very real ways the vulnerability of students whose belonging on campus and/or in society already feels precarious due to social identity, immigration status, ideology, and so on.

An inclusive freedom framework, in contrast, places equal importance on inclusion (making sure that all potential participants in a dialogue enjoy truly equal access to that dialogue, in such a way that their identities and experiences are respected, their contributions are valued, and their forms of knowledge and expression are recognized as legitimate) and freedom (making sure that all ideas are able to be heard, even those that are distasteful, controversial, hard to hear, or illogical). Ben-Porath argues that freedom and inclusion are in fact mutually reinforcing: when one is genuinely committed to both concepts, to defend one is to defend the other. She explains, “When some members of the campus community are effectively barred from speaking, when they avoid speaking their minds for fear of humiliation or ridicule, or when they do not feel that they belong or that they are appreciated, free speech is limited just as much as it can be limited by censorship. Defenders of free speech should be worried about both types of limits” (62).

When suggesting groups of students that have been historically excluded and continue to be marginalized, Ben-Porath refers mainly to racial/ethnic minorities, LGBTQ+ populations, and women, with a few mentions of non-traditional (that is, older) students and ex-military students. Given her extremely well-taken emphasis throughout the book on access, I would have liked to see explicit consideration of dis/ability, broadly defined (and including trauma). However, this slim volume is, as I read it, less a prescriptive manual for how to “do” speech on campus (though Ben-Porath includes a number of practical considerations and suggestions) and more an invitation to further thought and conversation around inclusive freedom and the extension and application of her ideas. As an anti-oppression or social justice text, Free Speech on Campus does important work in respecting the unique vulnerabilities of marginalized and minority students when it comes to speech on campus, while centering their agency and right to freedom.

The graphic below provides a basic definition for ten essential concepts related to inclusive freedom. (Download of a PDF of this graphic or access the plain-text version, which also has somewhat expanded definitions, including examples.) Following the graphic are a few reflection questions inviting you to dialogue with these ideas through the lens of your own values, experiences, and goals. 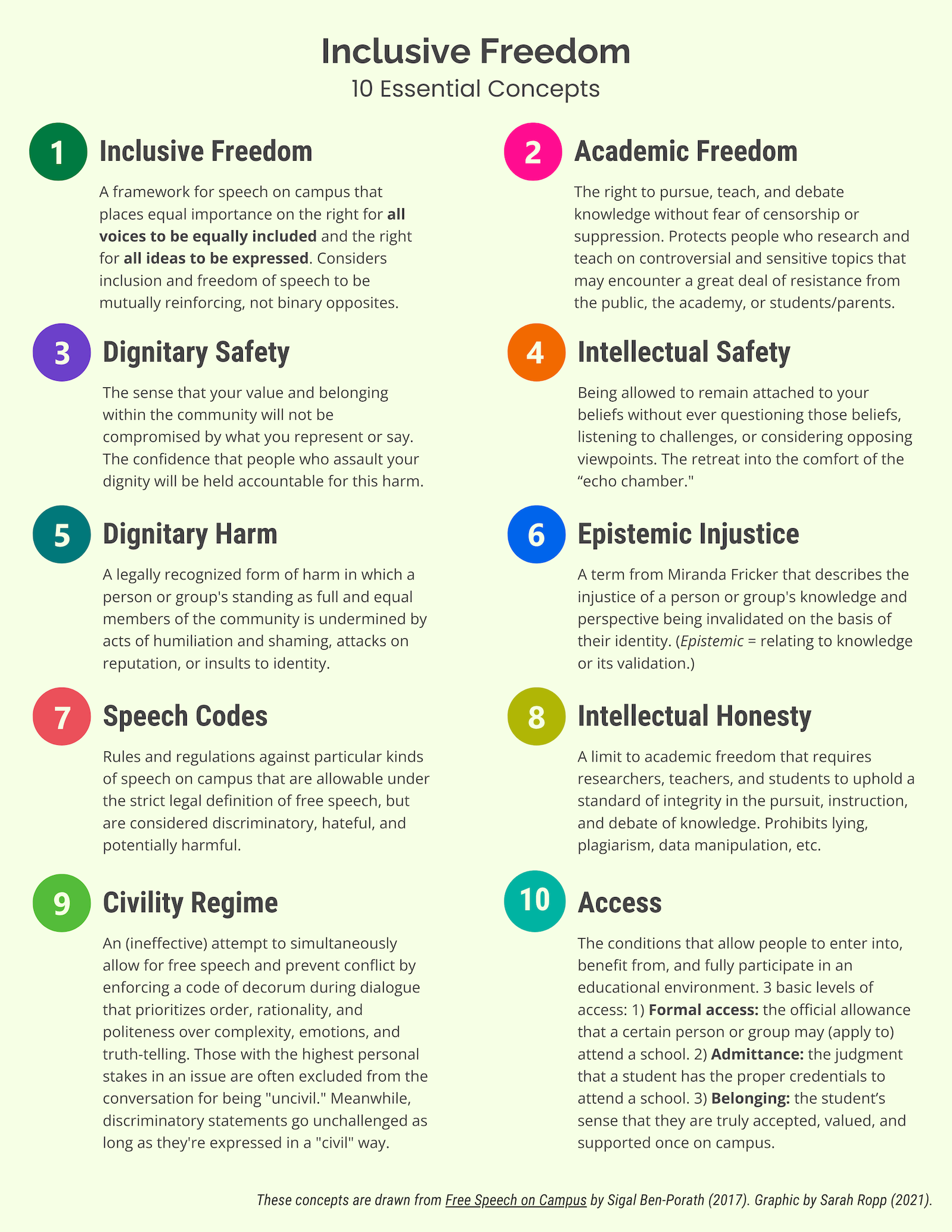