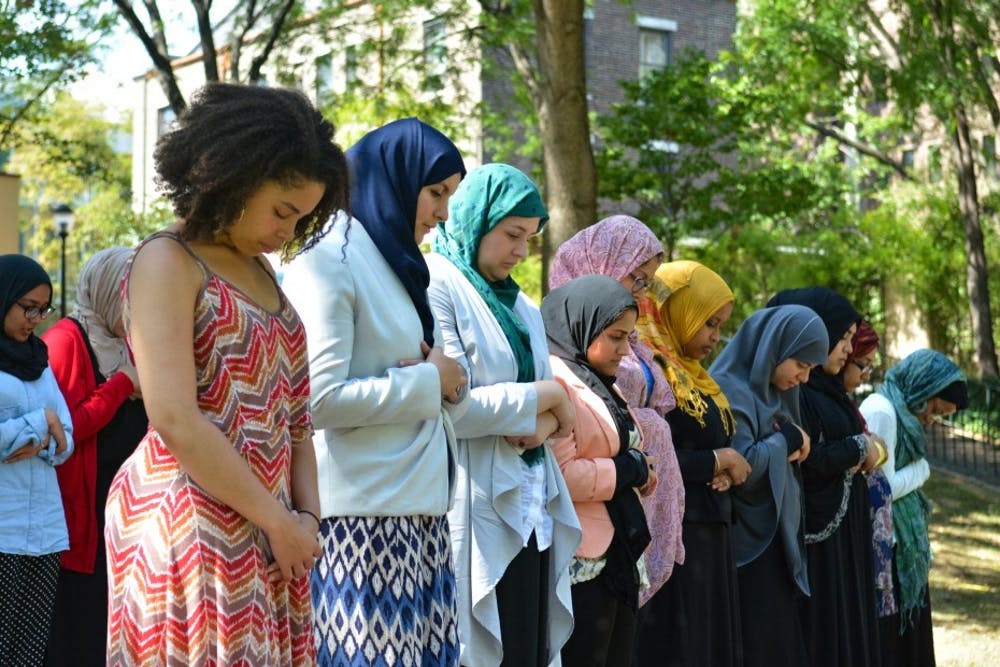 Ramadan, a monthlong period of spiritual rejuvenation in which Muslims worldwide abstain from eating and drinking from dawn to sunset, began April 1 and ended with the celebration of Eid al-Fitr, which took place on May 2. Because the Islamic lunar calendar dictates that Ramadan start and ends dates are increasingly earlier each year, 2022 was the first time in many years that the entirety of Ramadan took place while students were on campus.

Through forgoing bad habits, devoting time to prayer, giving to charity, reading the Quran, and reflecting, Muslim students explained Ramadan is a time to strengthen their relationship with Islam and God.

“It’s a time to recenter myself,” Wharton sophomore Rayane Taroua said. “I focus on how I can grow as a person, to make sure the good practices I begin now will become habits that last beyond these 30 days.”

College junior Fatma Omar said Ramadan is about “developing consciousness.” She added that she has “been emphasizing quality over quantity, improving the really simple things like my focus in prayer and reflecting on my daily intentions.”

MSA hosted catered group dinners for iftar — the fast-breaking meal eaten after sunset — every evening, worked to expand halal meal exchange options at Gourmet Grocer, and placed dates, which are traditionally used to break fast, in each dining hall.

Many Penn students said that these accommodations helped them to enjoy a tight-knit, welcoming community on campus this Ramadan.

College first year Aneesa Saha said her favorite part about observing Ramadan at Penn was meeting so many other Muslims at MSA events.

“The environment was so homey and welcoming, and it definitely helped me maintain the same spirit I would have while fasting at home with my family. To me, a big part of Ramadan is community,” she said.

“With the COVID-19 pandemic, most events were grab-and-go last year. I often felt lonely because I’m used to celebrating with a big family and to me, being Muslim means being part of a larger community,” Tigane said. “Organizing iftars this month and having over 100 people show up, being able to speak about my faith to others who understand, it’s all been a life-changer for my experience at Penn.”

MSA events at Penn are open to students from Penn’s graduate schools, as well as those from other universities — who said that they appreciated the environment of togetherness.

Shahrani Bhatti, a second-year law student at Penn Law School and president of the Muslim Law Students Association, said that she collaborated with MSA to co-sponsor iftars and encourage more law, business, and medical students to attend.

“The best aspect of Ramadan at Penn this year is the feeling of togetherness. Penn has such a large Muslim community that I didn’t experience at my undergraduate institution,” Bhatti said. “It can sometimes feel lonely to be one of the few Muslims in my law school classes, and so it is important to me to encourage other graduate students at Penn to join in the community celebrations.”

Temple University first year Sumayyah Nabiyeva said she came to Penn for iftar meals and prayers for almost half of Ramadan.

“At Temple, the MSA does not have a permanent prayer space on campus. I’m appreciative that the Penn community has been super inviting and warm, supporting me as I use Ramadan as a time for self-love, spiritual cleansing, and strengthening bonds with family,” Nabiyeva said.

Several MSA board members said that they appreciated the Penn administration’s support during the Ramadan planning process.

“Everything we requested, they’ve never turned down,” he said. “They’ve been particular about sourcing and preparing halal meat properly. You can tell they genuinely want us to have a good dining experience, and I look forward to working with them to continue expanding halal options on campus.”

College sophomore and MSA Social Chair Sarah Asfari said that support from centers on campus — including the SNF Paideia Program, the Pan-Asian American Community House, Penn First Plus, the Greenfield Intercultural Center, and the Middle East Center — were integral to hosting Ramadan events.

“We reached out to many places at Penn to get sponsorships and prayer spaces for our nightly iftars, and we received such an enthusiastic response,” she said.

Taroua, MSA project development chair, echoed these sentiments, adding that Anton and Senior Associate Chaplain Steve Kocher, the director of Penn’s Spiritual and Religious Life Center, have been especially helpful. She added that they helped organize an iftar with the President’s Office, where Interim President Wendell Pritchett spoke.

Despite this support, some students said they struggled with balancing academic commitments with their goals for Ramadan. Fasting students’ energy levels can crash throughout the day, they said, meaning getting sufficient sleep and studying can be difficult. Several students urged professors to be more understanding of fasting students’ requests for accommodations.

“I think for many Muslims, there’s a conflict between going to Taraweeh prayers at night or using the time to do homework, which can lead to feelings of guilt,” Tigane said.

“It doesn’t seem fair that Muslims have to pick between celebrating Eid and studying for exams,” Tigane said. “There are so many Muslims on campus, and more recognition from the University would make it easier for students to ask for extensions or reschedule exams.”

Asfari said that she would have liked to see more visibility for Muslim events on campus.

“Other campuswide holiday celebrations, like Holi on College Green, were really enjoyable for Penn students of all backgrounds. I think it would be really nice to have something similar for Ramadan, so that more faculty and students actually know what the month is about,” she said.

Some students expressed additional hopes for improving Ramadan experiences at Penn, such as having opportunities to use Dining Dollars and swipes for iftar and suhoor meals throughout Ramadan.

“If we could donate swipes or convert them into Dining Dollars, that would be a lot more convenient,” she said. “Because I can’t use them while I’m fasting, they’ll just go to waste,” Saha said.

Asfari added that she is working on creating a Muslim mental health initiative with Penn’s Counseling and Psychological Services and sees Ramadan as a chance to better check in on the Muslim community’s well-being.

Tigane said that she hopes to foster a tighter-knit Black and BIPOC Muslim community at Penn. As a Black Muslim woman herself, she said these intersectional safe spaces are pivotal to a student’s college experience.