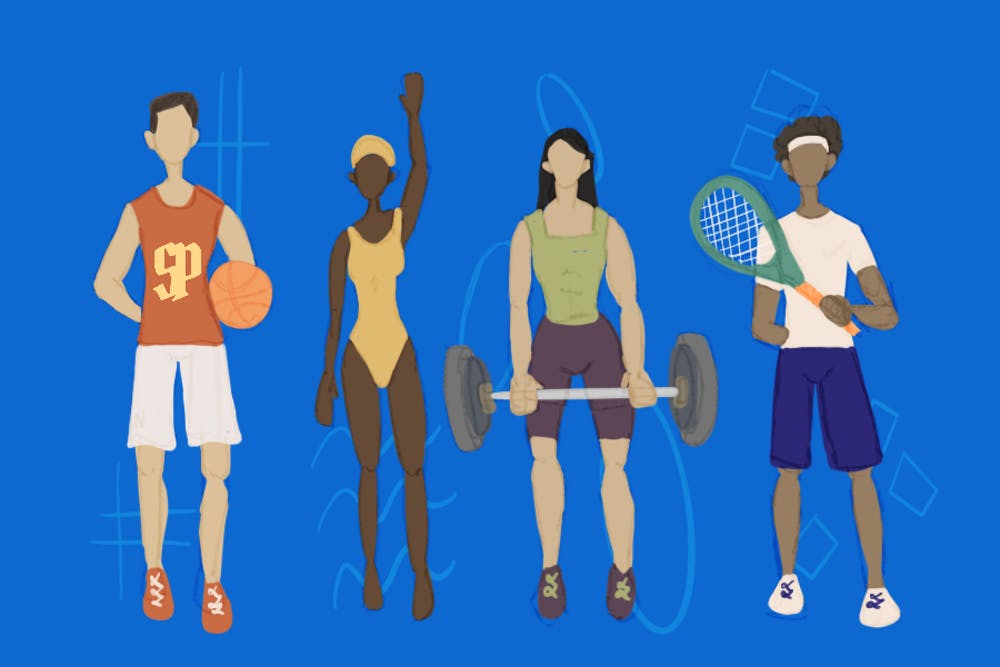 These days Penn Women’s Basketball player Kayla Padilla (W ‘23) finds herself shooting hoops in her grandma’s backyard in her hometown of Torrance, California—miles away from the sleek, top-notch facility of the Palestra.

While she describes her transition to training at home during the pandemic as frustrating at first, she has found solace in the fact that she has come full circle, back to the park where she first started working towards her basketball dreams. The experience has made her remember the anxieties of her teenage years devoting hours to grueling practice in sunny California.

She expresses that she wishes she could tell her younger self, “Don’t be afraid. A lot of athletes limit themselves to what they know. Don’t put limits on yourself, go after what you want.” Kayla created The Sideline Post, a digital media sports publication written for and by student athletes, as a platform to do just this. As she collects the narratives of student-athletes across the country, she hopes to inspire and encourage the next generation of athletes. A long-time fan of The Players Tribune, a publication for professional athletes, Kayla hopes to build a similar space for collegiate athletes to share their personal stories and challenges, off and on the field.

Some of the publication’s first-person narratives so far have shed light on hurdles that many athletes experience but few discuss, such as mental health struggles and eating disorders. “I think a lot of the spectators of sports [are] really just viewing our games and our stats, but you don’t really see the difficult journey it takes to get to this point,” Kayla explains. “And a lot of that deals with body issues and just kind of having to adjust to a sport’s diet.”

Of all the published articles in The Sideline Post, Kayla is most proud of a series confronting racism in athletics. Kayla sees issues of inequality and sports as inseparable—it’s important to her for athletes to have open dialogue and be aware of their biases at all times. For Kayla, a lack of diversity in basketball has been extremely apparent in her athletic career.

“There’s maybe, like, five Asian players in the Ivy League basketball conference.” As a Filipino-American, she recognizes the challenge of forging her own path in a sport with little Asian representation, but also celebrates the unique opportunity to “be a role model to other people who want to be in my position and know that it’s possible for girls like us.” The publication is now partnering with a student-led initiative, Athletes Taking Action, which seeks to raise awareness and funds for BLM organizations.

Kayla attributes much of her success to her family. “The Philippines has a very great love for basketball, so I was kind of born to love the game,” she explains. Her parents are her greatest support system, giving her the freedom to spend her undivided attention on basketball all the way up to and throughout her time at Penn. On a typical weekday, Kayla devotes her mornings to her schoolwork, her afternoons to training, and an hour or two in the evening to work on the Post.

Kayla’s ultimate role model is fellow Los Angeles basketball player Kobe Bryant and she seeks to emulate him in everything she does. This mindset neatly aligns with the advice that she has for other student athletes dealing with the pandemic: “Find ways to get better every day regardless of the facilities and resources available, because our time is coming soon. Just be ready, and stay ready.”