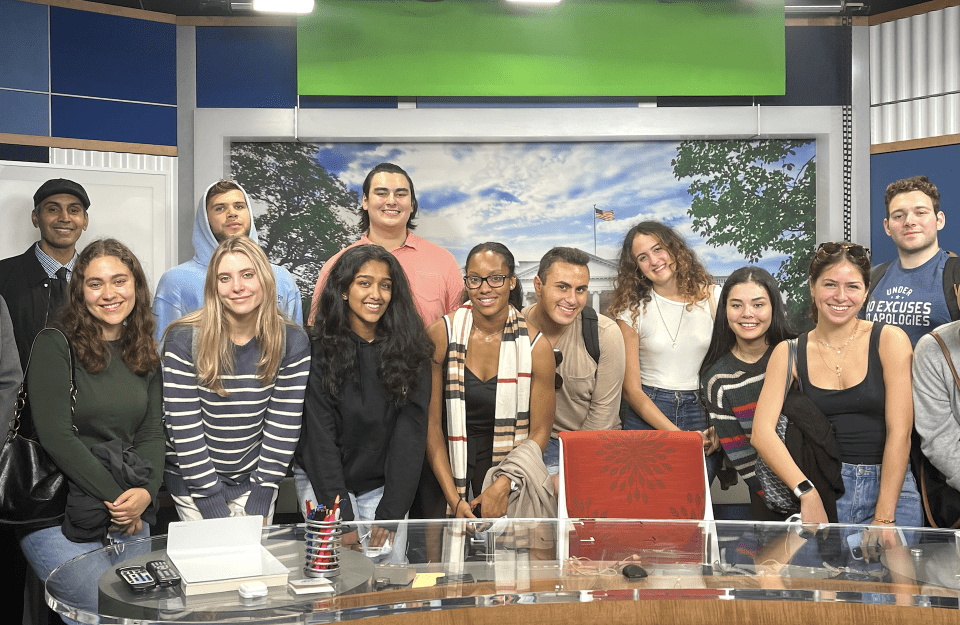 Balaji’s class incorporates current events, case studies, and discussion to help students engage with the ways in which nationalism and media intersect. It is a SNF Paideia designated course, part of Penn’s SNF Paideia program, a cross-university program that provides undergraduates with the knowledge, skills, and ethical frameworks necessary to be informed, engaged, and effective community members.

A trip to the U.S. capital seemed fitting, given its role in shaping the country’s identity—not only as the home of the U.S. president, but also as the site of museums, monuments, and buildings that tell the American story.

During the trip, students visited three places that tied into their coursework: NHK World, a Japanese public TV news broadcaster; Americans United for Separation of Church and State, a nonprofit that advocates for the separation of church and state; and the Smithsonian National Museum of American History.

Balaji’s goal for the trip was twofold: to give students space to think about the topics of the course outside of the classroom and to allow them to engage with people on the front lines of confronting these topics.

“Throughout the semester, my students have been discussing case studies about the ways in which the media upholds or challenges ideas of nation, community, and nationalism,” Balaji says. “But my students had not had hands-on experience until this trip.”

A self-guided tour of the National Museum of American History allowed students to reflect on how museums can be part of socializing citizens toward a collective identity.

“As I was walking through the war section of the Smithsonian, none of the wars that America lost were really displayed or mentioned,” says Sydnei Caldwell (C’22). “I learned that from a young age, the narrative of America being powerful and dynamic is the only one we see portrayed.”

At the NHK World studio, students asked journalists about reporting on America from a Japanese perspective. They saw where news programs are filmed and spoke with Masaru Takagi, NHK’s Washington Bureau Chief, on his role in global media.

“Americans frequently look at international news in terms of how we see countries outside of American borders,” Balaji says. “For my students, it was interesting to see how Japanese broadcasters see America and fit within the media landscape.”

At the Americans United for Separation of Church and State headquarters, students talked with Executive Director Rachel Laser, who spoke about Christian Nationalism and current efforts to uphold separation of church and state in the U.S.

Caldwell says this was her favorite part of the trip. She says that talking with Laser made her consider that “cases that we might not even think deal with church and state actually do and have greater importance on our everyday lives than we might initially realize.”

“This trip allowed my students to see firsthand how national identity unfolds in the real world,” Balaji says, “They saw the U.S. Capitol. They saw some of the barricades left up after January 6. Seeing the city, as well as interacting with the speakers on this visit, really gave them insights beyond classroom instruction.”