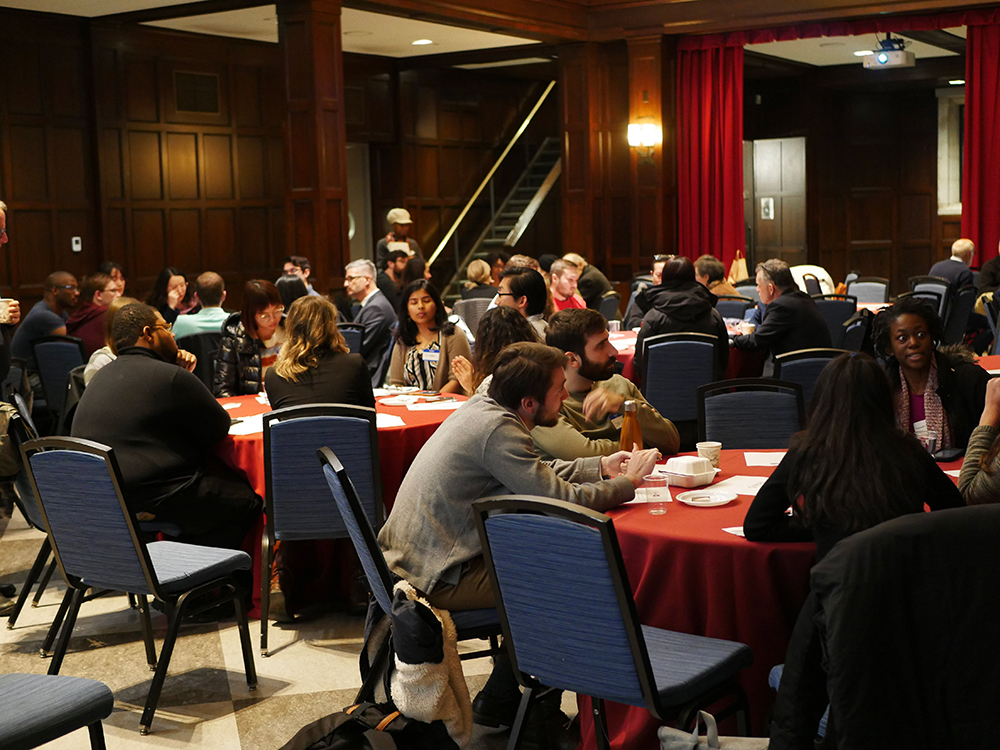 Students from regional colleges gather in the Hall of Flags for the first Can We Talk? event.

What bubbles do you live in and how you can break free of them—or at least expand them? How does the household you grew up in shape your political views now? What’s your No. 1 issue in this 2020 election, what do you want to see done about it—and what’s the best argument against your position?

Although we came to the table with different backgrounds and beliefs, we were able to discuss important issues and ask thoughtful questions to keep the conversation going.

After a review of eight ground rules for the conversation and an ice-breaking exercise where students chatted with one another about the “multiple identities” that define who they are, participants dug into a sequence of questions about their values and views. The ground rules challenged them to listen well, ask good, clarifying questions of one another, and be willing to acknowledge gaps in their own knowledge and doubts about their own views.

How to Puncture Social Bubbles

A question about identifying and puncturing the bubbles in which people live generated some probing, candid discussions. Among the bubbles people identified were campus, race, class, income, hometown, field of study, political party, social media habits.

Differing views were presented in civil ways and discussed properly.

The students proposed a variety of strategies for expanding or getting outside comfortable bubbles:

Climate change got the most play during the table discussions of issues, followed by health care equity, income inequality, criminal justice reform, immigration, and gun violence. A meta-issue loomed over the discussion of all those issues. The students returned again and again to the relative merits of capitalism vs. socialism, with socialism defined by the young voters who espoused it as something similar to the Bernie Sanders/Alexandria Ocasio-Cortez program.

Here’s a sampling of memorable points made during the issue discussions:

Based on self-descriptions on surveys, the students’ political orientations ranged from “libertarian” through “conservative” and “liberal” to “socialist,” with the left side of the political spectrum more amply represented.