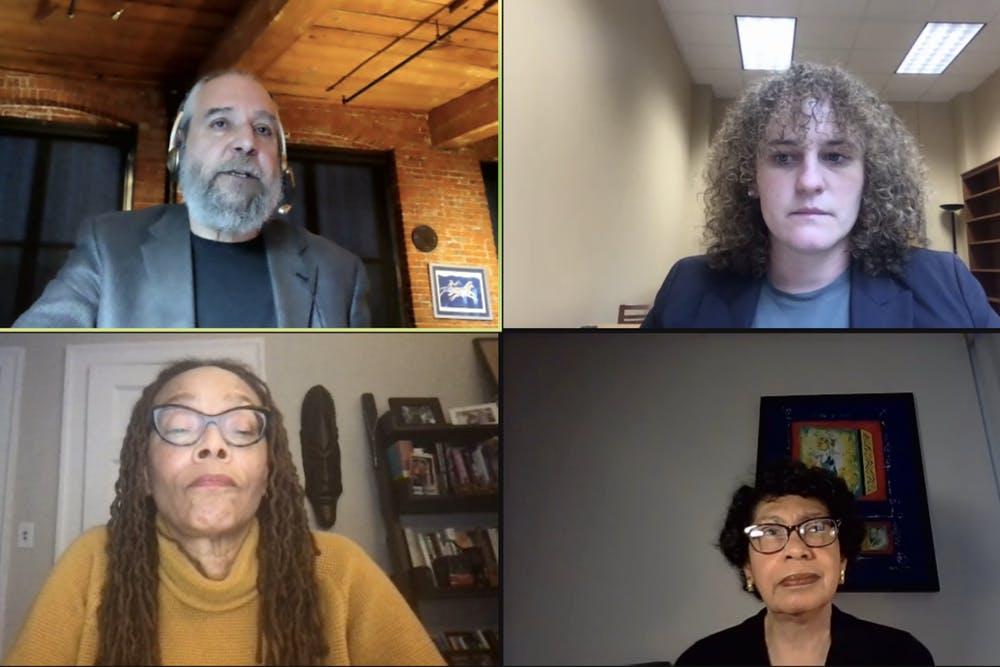 Following widespread protests after the police killing of George Floyd, the panelists said the United States may be in a moment for transformative change, although only time will tell whether the protests will translate into substantive reform.

“We’re seeing both an explicit expression and a movement that’s gaining steam about trying to address structures of inequality,” Walker said. “We have also witnessed, at the same time, really explicit expressions of the desire to hang on to a system of racial authoritarianism.”

Panelists also discussed the racial disparities and mass incarceration in the United States, with Austin noting how the cyclical nature of the penal system explains the disproportionate number of Black Americans who have “aged in the system.”

Walker cited the Prison Policy Initiative’s statistics on “jail churn,” which show that, while there are about 600,000 people who enter prison each year, there are more than 10 million jail admissions annually, as jail admissions include people who have not been convicted of a crime. At least one in four people who go to jail will be arrested multiple times in a given year, Walker added.

The individuals who return to jail are often dealing with poverty, mental illness, or substance use disorders, which can be exacerbated by incarceration, according to the Prison Policy Initiative.

In order to reform the U.S. penal system, Roberts suggested incremental steps, including stopping prison expansion, hiring fewer police officers, and eliminating discriminatory mandatory minimums. She added that the problems with the criminal justice system are structural, as the racial disparities can be traced back to slavery.

“You can’t address it just by trying to fix something that’s gone wrong in a system that actually was designed to subordinate whole groups of people,” Roberts said.

Austin, who has worked firsthand with Pennsylvanians sentenced to life imprisonment, proposed involving incarcerated individuals in community reform to fix the system.

“We need to involve them in whatever political activity is ongoing outside of the facilities having to do with their well being and with their freedom. I’m amazed at how political people inside penal institutions are — how much they want to do in terms of impacting the outside communities. They are engaged in all sorts of activities that have a positive effect outside of the prison,” Austin said.

The panelists also discussed the disproportionate impact of COVID-19 on people of color, particularly Black Americans. Roberts and Walker said the pandemic has only laid bare pre-existing structures of racism.

“Some people believe Black people are dying at higher rates because of some innate problem that Black people have. I think the pandemic shows how these deep inequalities in living conditions that stem from structural racism are what’s really the cause,” Roberts said. “One is the way in which it’s killing people in prisons and the devaluation of incarcerated people’s lives.”

Thursday’s preceptorial was the first in the series’ two-part sequence focused on the criminal justice system. The second event, “Policing and Public Safety,” will be held virtually on Feb. 24.