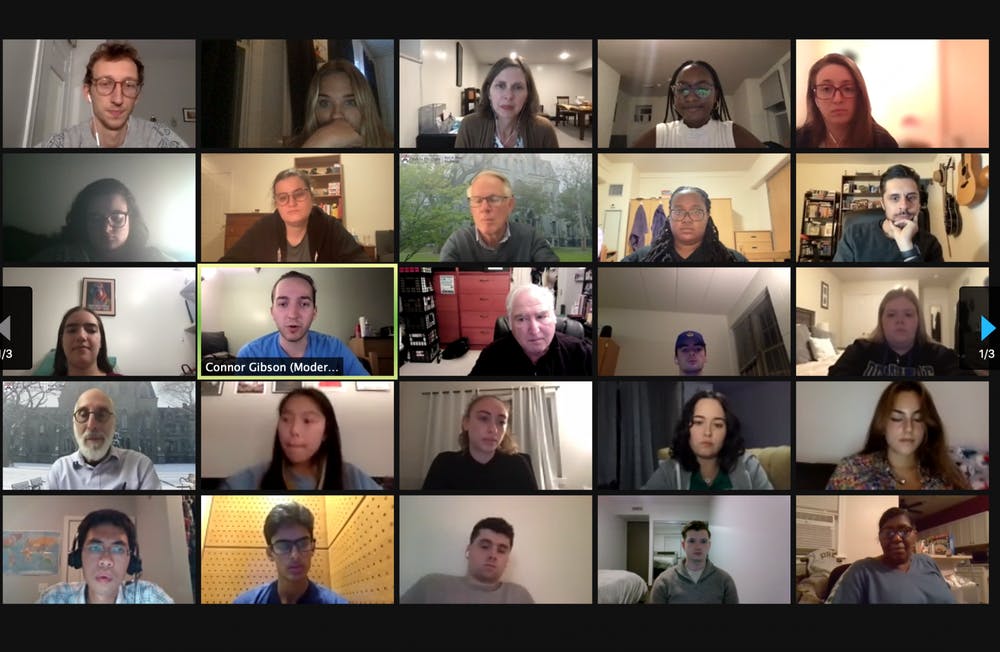 The event, one of the recurring “Can We Talk? Civil Dialogue for Troubled Times” conversations hosted by Penn’s SNF Paideia Program, fostered student discussions on topics such as the role of Greek life on college campuses, mass incarceration in the United States, self-censorship in classrooms, and whether the U.S. is truly a meritocracy. These discussions are part of the Gamba Family Red and Blue Exchange, an initiative of the Paideia Program designed to promote the expression of divergent ideas about issues facing modern society.

Cecelia Vieira, a College senior at Penn who attended the event, said she was most interested in fellow attendees’ beliefs about self-censorship in the classroom, which was one of the assigned discussion topics.

“Although I’ve had a pretty great experience at Penn in terms of feeling comfortable sharing my unvarnished thoughts and opinions, I do feel like people in my classes tend to moderate themselves to avoid seeming too radical — and this comes from people from all ends of the ideological spectrum,” Vieira, a former copy staffer, told The Daily Pennsylvanian.

While Vieira said she was glad she attended the event, she said discussions like this can be self-selective with the kinds of students who choose to attend and engage in these conversations, which she believes can hinder the effectiveness of changing campus culture overall.

“The people who came were clearly people who were already comfortable voicing their opinions and speaking their minds. It was definitely a really interesting experience, but I didn’t feel like anyone there really had to be taught how to engage in civil dialogue, which was the stated goal of the event,” Vieira said. “So at the end of the day, I’m not sure how much impact these voluntary events can really have on campus culture.”

The discussions in this event series are held in accordance with guidelines aimed at promoting a sense of mutual respect and acknowledgement of the diversity of views present in the conversations. Students are encouraged to listen to other perspectives, welcome disagreement, and avoid personal attacks or insults.

Delaney Duricek, a junior at Widener University who participated in the dialogue, said she really enjoyed listening to students’ sentiments on the topics, especially surrounding the role of Greek life on college campuses, in light of recent fraternity-related scandals at both Penn and the University of Delaware.

Last month, a Penn sophomore sustained serious injuries after he was allegedly attacked by a Psi Upsilon fraternity brother at a party held at their chapter house, prompting significant student backlash and campus protests demanding action from the University. The University told the Daily Pennsylvanian they are investigating the incident.

“I felt like there is a level of privilege within the types of people at these institutions that join these [Greek life] organizations, that people weren’t really ready to talk about yet [at the event,]” Duricek said. “They’re usually white, straight men with trust funds. When I think about Greek life, that’s what I think about.”

The conversation helped solidify Duricek’s belief that universities have a role in calling out Greek life culture that promotes the recurrence of assaults on campus.

“I think specifically at Penn and Delaware, the schools did not address the underlying causes of the assault. A lot of the assaults probably go unrecorded every year,” Duricek said. “We’re not doing enough to call out the culture that promotes these assaults.”

Satullo said he believes the event’s purpose — to promote viewpoint diversity — is enhanced by the inclusion of students from a variety of campuses.

“We hope to equip people with some tips that they can use all the time — in class, online, at home with family, in the workplace — so that they’re able to take what they learn into the world and share these civic dialogue skills, and the information they learn, with other people, and promote civic discourse more widely,” Satullo said.

Satullo said he was proud to announce that Tuesday’s event featured the largest number of student moderators in the series’ history, a trend that he hopes to continue through increased student involvement and leadership in the future.

Echoing Satullo, College junior Sydney Nixon, a Paideia fellow who helped moderate the event, said events like this help instill conflict resolution and active listening skills in students, which can be useful no matter what they are hoping to pursue as a career.

“There’s a huge perception that dialogues like these are only beneficial for people who are in the humanities or political science,” Nixon said. “In many fields, conflict is unavoidable, and these dialogues help to know how to deal with it in a collaborative sense.”

The next “Can We Talk?” discussion will be held on Nov. 30. Students can register for the event here.