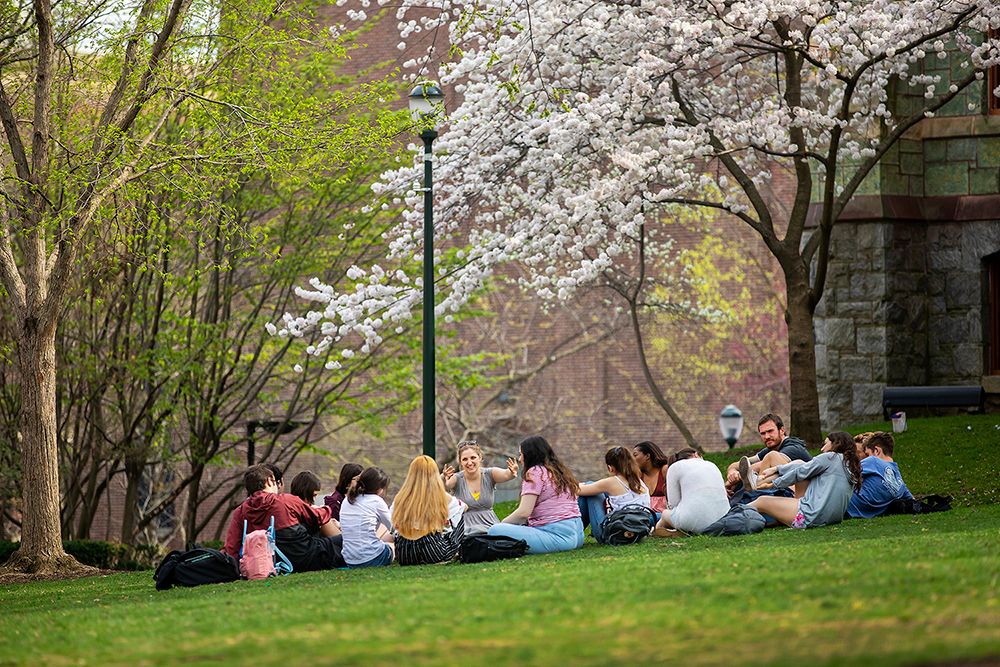 The program, announced in March with a $6 million gift from the Stavros Niarchos Foundation, reimagines the ancient Greek ideal of Paideia—“education of the whole person”—for the 21st century and beyond, with courses focusing on wellness, service, and citizenship.

“Paideia emerged out of a concern regarding the state of civic discourse about contentious issues in the United States today,” says Michael X. Delli Carpini, the program’s faculty director. “Anyone paying attention to the news knows that we’re in a moment of hyper-partisanship and the absence of agreed-upon facts. This combination works against our ability to deliberate about the pressing issues of the day in productive ways.”

The program aims to “give students the skills, knowledge, experiences, and values to talk with those different from themselves in their ideological views or in other ways and to have robust discussions and even disagreements but in ways that are informed and that treat each other and their views with mutual respect,” he says.

Paideia will begin as a five-year pilot program, building on and collaborating with existing programs and organizations on campus. It will include cosponsored events and deliberative forums, co-curricular opportunities, internships, undergraduate fellowships, and a set of Paideia-designated courses open to all of Penn undergraduates, the first of which will be offered in the coming semester. Course selection opens today.

The four inaugural Paideia courses are:

Grit Lab: Fostering Passion and Perseverance in Ourselves and Others

with Angela Duckworth in the Department of Psychology in the School of Arts and Sciences.

At the heart of the course are cutting-edge scientific discoveries about passion and perseverance for long-term goals. The ultimate aim of Grit Lab is to empower students to achieve personal, long-term goals so they can help others achieve the goals that are meaningful to them. The first half of the course is about passion. Each student will identify a project that piques their interest and resonates with their values. The second half of the course is about perseverance. Students will aim to develop resilience, a challenge-seeking orientation, and the habits of practice that improve any skill. Grit Lab requires students to apply what they learn in their daily lives and to teach what they’ve learned to younger students.

“The first time I heard the word Paideia it was in the context of the National Spelling Bee as the name of the word list for official competition,” Duckworth says. “Now I better appreciate its meaning and couldn’t be more excited to be part of the initiative here at Penn. I’m going to try in this class to apply everything I know as a psychologist to what we learn and how we learn it. My goal is that the students learn something about the world, themselves, and how they can make a unique contribution to making the world better, particularly for younger people for whom they are role models.”

Can We Talk? Courageous Civility for Troubled Times

with Harris Sokoloff of the Graduate School of Education

Civil dialogue is an aspiration, a theory and a practice, and one of the most misconstrued terms in contemporary political discourse. In this course, students will explore attributes of civil dialogue: aspiration, theory, and practice.

This exploration will include the history of civility in American politics, the philosophical roots of the modern practices of civil dialogue, and the approaches, practices, and techniques of civic dialogue: ways to frame issues, self-examine biases, convene a diverse group, and guide a dialogue to a productive result.

“It has become increasingly difficult for each of us to have productive dialogue and deliberation with others about public issues whether we agree with the other person or not,” Sokoloff says. “If we agree, our conversations tend to reinforce our assumptions, rather than to explore ways to stretch our understanding of ideas and events. If we disagree, those interactions that do occur too often devolve into diatribes, name calling, call-outs, or cancelling.”

Participants in this course “will learn skills that can be used in a variety of settings to engage with others to seek deeper understanding of ideas and actions, perhaps even a new, more productive understanding of one another,” he says.

Rhetoric and the Community

The class is designed to improve the quality of students’ speaking abilities. Through debates, impromptu speeches, and other types of oral reports, students will develop their skills as speakers. The emphasis is on practical advice, constant positive criticism, and an active exploration of the art of oratory.

“It will emphasize the role of effective oral communication in contributing to a higher level of engagement and discourse in the community,” McInerney says. “The class will be particularly helpful to those planning careers in advocacy, public service, teaching, and other areas where confident, thoughtful, and articulate communication are important.”

The Chinese Body and Spatial Consumption in Chinatown

The course “takes as its topic the imagining and reimagining of the Chinese body by dominant white culture from the 19th century through to today,” Lum says. “Outside of the pithy narrative of Chinese contract laborers building the railroads, the place of the Chinese in American history remains an understudied and undertheorized topic in America’s foundational stories.”

The course will look at representations of the Chinese and Asian body since the Limehouse district in East London and the advent of Chinese contract laborers to American in the 19th century. The localization of the Chinese throughout the Americas within Chinatown precincts was also subject to representational imaginings that were negotiated through the lens of civic planning, literature, and later in cinema.

It will offer a deep dive into the history and evolution and nature of Chinatowns in the United States, and is intended to educate students about the nature of various ethnic communities in a way to make them appreciate the design of public space, Delli Carpini says.

As part of the course, students will travel to a large Chinatown in the U.S. to talk to people in an ethnographic way to help understand what it means to negotiate difference, he says.