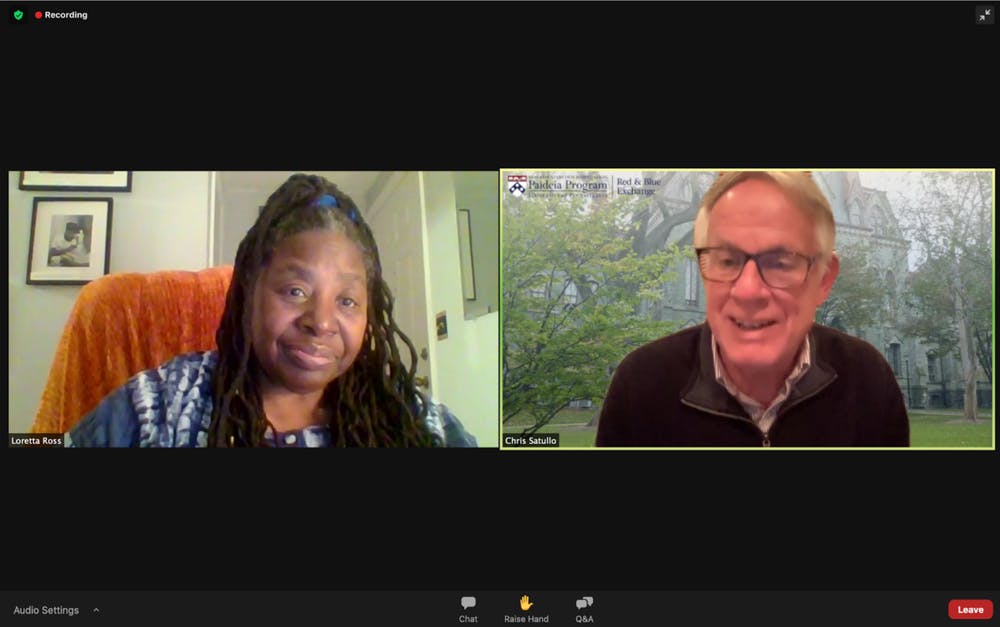 The event, titled “Calling in the Calling Out Culture — A Dialogue with Loretta Ross,” explored Ross’s philosophy of standing against injustice with an approach of love, respect, and grace. The event also featured a conversation between Ross and a group of Penn undergraduates involved in URBS 245/EDUC 244: Civil Dialogue Seminar: Civic Engagement in a Divided Nation, an SNF Paideia Program designated course.

At the event, Ross described how “cancel culture” and the tendency to “call out” others can prevent progress by publicly humiliating and isolating others. When a person is called out, they seek to defend themselves rather than engage in a productive conversation, Ross said.

As an alternative to calling out, Ross discussed her theory of “calling in,” an approach that encourages conversation between people who share different views. By listening to another person and recognizing their humanity, there is a greater opportunity for change, she said. Still, no one should expect to succeed in changing another person’s mind, Ross added.

“When you use a calling in, you’re inviting people into a conversation, instead of a fight, and you’re more likely to have an influence on someone. If they know that you are listening to them carefully, respecting their humanity, even as you disagree with them, you’re more likely to make headway with that person,” Ross said.

Ross also explained two other approaches to discussing issues of justice: “calling on” and “calling off.” Calling on is requesting that someone “do better,” while “calling off” consists of ending a non-productive conversation.

The event also included discussions about self-care and self-forgiveness as a necessary step before having difficult conversations with others who share different opinions.

“Ask the question, are you in a healed enough space for a difficult conversation?” Ross said.

Ross has a long history of activism and teaching about the dangers of call-out culture. In 1978, Ross joined the women’s movement, working at the first rape crisis center in the country. She also started her own podcast, Dred Feminist, which has featured conversations surrounding cancel culture and the role of Black women’s activism in Georgia.

Following Ross’s discussion, students joined the conversation and asked questions regarding how to respond to performative activism, diffuse cancel culture in a college environment, and navigate cancel culture on social media. Ross encouraged students to start conversations with those who disagree with them, yet added that students are under “no obligation” to call others out.

She noted that students standing up for the “right thing” should be prepared to risk being canceled themselves. Ross maintained, however, that it is better to speak up despite any fears than to have regrets after the fact.

Wednesday’s event was organized by the Red & Blue Exchange, an initiative at the SNF Paideia Program that encourages open dialogue and the exchange of diverse viewpoints. Similar themes will be discussed in events held throughout the rest of the semester.

“This is our time to stand up for free speech for civil engagement for a pluralistic society, in which everyone is seen as important and valuable in that society,” Ross said.