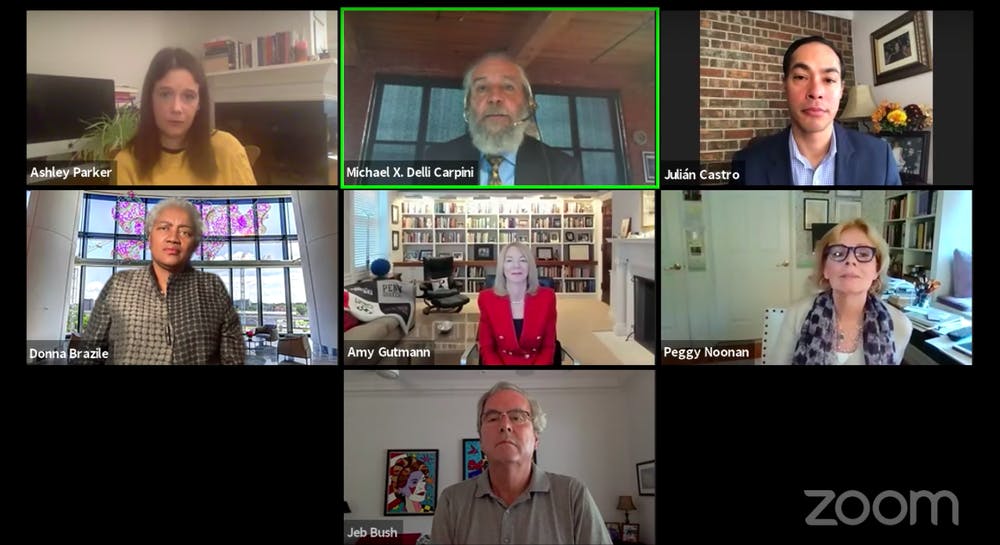 The Silfen University Forum is an event series held to promote conversation and debate on contemporary issues. The discussion took place virtually this year, rather than in Irvine Auditorium, where panelists have convened for the forum in previous years.

Oscar H. Gandy Professor of Communication & Democracy Michael X. Delli Carpini, who moderated the event, began by asking the panelists about Trump’s actions leading up to the election. Panelists criticized Trump’s aggressive rhetoric against his rivals and the media.

Parker, a former writer and editor at The Daily Pennsylvanian and 34th Street Magazine, noted Trump’s antagonizing of members of the media during his rallies, which she referred to as the “Trump show.” In 2019, Trump called Parker a “nasty lightweight reporter” on Twitter, calling for her to be banned from the White House.

Noonan said that Trump’s highly partisan discourse has also negatively impacted his handling of the pandemic. She added that his rhetoric around the pandemic has made communicating with the public about how to safely reopen more difficult.

Bush said the lack of civility in discourse extends beyond just Trump and criticized current political rhetoric in general.

“Politics is a mirror — a circus mirror, perhaps — of our culture,” Bush said. “We have changed as a nation. We are more vulgar. We are less civil. We don’t interact amongst people that we may not agree with anymore. We’re in this bubble where we’re getting our news validated every day.”

Castro, however, said that the concept of civility can be manipulated to silence people calling for change.

“Today, people who are protesting inequality in this country and police brutality often would get called uncivil, that you’re out of order,” Castro said. “So I do think we have to parse that out. We absolutely need to get to a civil discourse that is focused on the highest aspiration, the ideals of our country and people working together productively.”

Both Parker and Bush said that Trump’s repeated use of misinformation has harmed civil discourse. Trump has continually undermined faith in the election, casting doubt on the validity in mail-in voting. In the first presidential debate on Sept. 29, Trump said that “bad things happen in Philadelphia,” calling for poll watchers to monitor voting.

“The shamelessness and brazenness is a tool he has been able to leverage, very sadly, to his advantage,” Parker said.

“The truth is it’s gonna take more than just a new president and new congress,” Brazile said. “It’s gonna take believing in one another, rebuilding our public institutions. There’s so much damage out there. We’re going to have to work very hard as Americans to find our way back.”

Although panelists and audience members did not meet face-to-face, an online post-event dialogue hosted by the Stavros Niarchos Foundation Paideia Program allowed students to weigh in on the topic. Some expressed hope about the future of civility in political discourse.

“This event was a firm reminder that civil discourse isn’t dead,” Wharton first-year Sebastiane Caballes said. “Has political and civil discourse become more vulgar recently? Yes, to varying degrees. However, we are far from the removal of civil discourse in our society and it’s simply a question of how long, how much effort will it take to get back to where we would like it to be.”