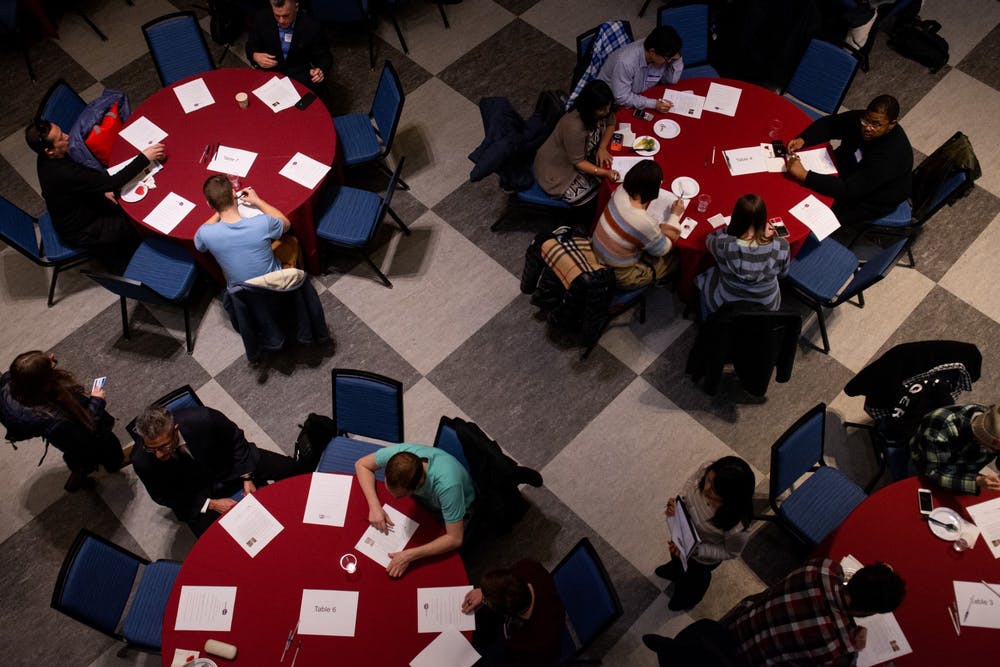 Students from the Philadelphia region gather for moderated discussions on various political topics.

Students from nearby schools gathered for an event titled “Can We Talk? Civil Dialogue for Troubled Times” at Houston Hall’s Hall of Flags on Wednesday night.

Harris Sokoloff and Chris Satullo, instructors of the EDUC 245 course “Can We Talk?,” organized the event, which is the first in a series of three that they will host this semester. The course is one of the four new Paideia courses introduced this spring that are meant to promote civil discourse around complex political issues. The discussion was held for students to listen to each other and discuss their disagreements on various political issues.

The Hall of Flags was set up with numerous round tables, each comprised of students and moderators. The students were asked three main questions about how their families discussed politics while they were growing up, how living in their respective race, class, and economic bubble impacts their lives, and what issue is most important when deciding who to vote for in 2020.

The students and moderators hailed from Penn and other nearby schools, including Drexel University, Eastern University, Haverford College, the Pennsylvania College of Optometry, and the Community College of Philadelphia.

Climate change, healthcare reform, and poverty were the issues most frequently mentioned that the students found most important ahead of the 2020 elections.

After the event, students said they felt satisfied by the discussions and appreciated the diversity of views they were exposed to.

“I thought it was very beneficial, and I got to meet new people,” Eastern University first-year student Alexis Shoemater said.

Satullo, who is the former vice president of WHYY, said he and Sokoloff, who is a professor in the Graduate School of Education, were inspired to create an event encouraging civil dialogue by a colleague who told Satullo that he was concerned by students who were confiding in him that others would find out that they voted for 1968 Wharton graduate President Donald Trump in 2016.

Sokoloff and Satullo have hosted similar events at other schools, such as Carin University, New York University, and Columbia University.