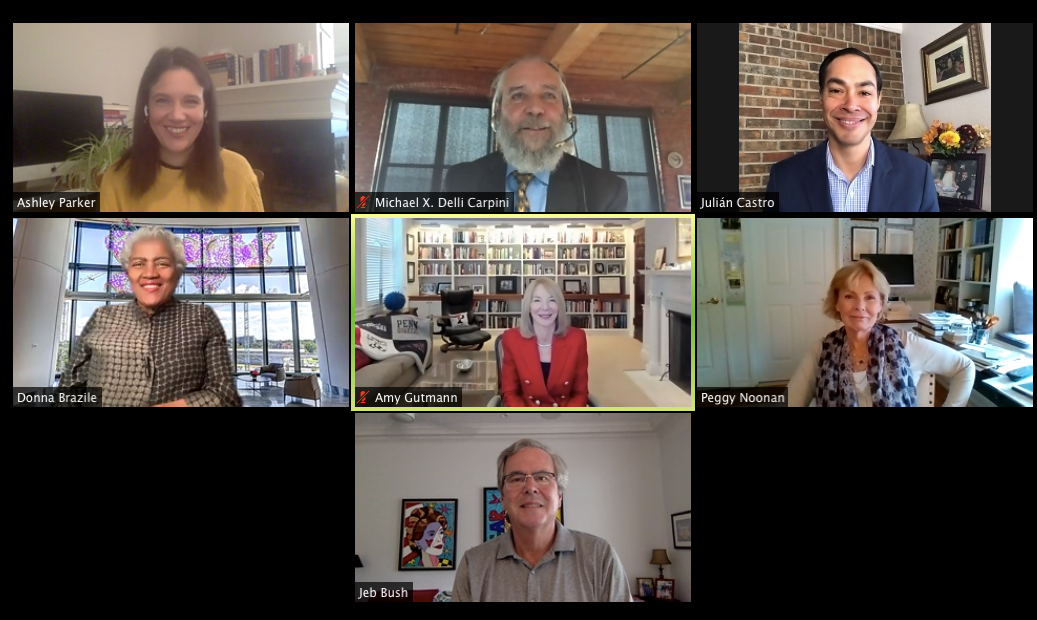 With a glance at the TV, a flip through a newspaper, or a scroll on social media, the incivility of today’s public sphere can’t be denied. Our politicians spew vitriol at one another on the debate stage while everyday citizens attack each other’s beliefs back at home, or sometimes in the worst way—anonymously through a screen.

“Our politics is a mirror of our culture,” said former Florida Gov. Jeb Bush Tuesday, during Penn’s 11th David and Lyn Silfen University Forum, which had a theme this year of “Civil Discourse in Uncivil Times.”

The hour-and-a-half long event, which brought together what Penn President Amy Gutmann called a “blue-ribbon panel” of experts, was originally slated for this past spring, but was moved to this semester and to a live, online format due to COVID-19. More than a thousand people—including students, faculty, staff, and alumni—tuned into the event.

In the midst of a historic presidential election, a worldwide pandemic, and the largest mass movement for racial justice in generations, the conversation, which encouraged listeners to reach across divides, came at a pivotal time.

“With 20 days to go before a presidential election, political scientists are documenting hyper-partisan divides, demonization of political opponents, and rampant misinformation gone viral over social media, even about basic matters of life and death,” said Gutmann, as she opened the Forum. “But these phenomena are not new to 2020. It’s well documented that we tend to listen to like-minded media, we tend to shut out facts that challenge our own beliefs. … It takes hard work to counter these tendencies.”

It’s well documented that we tend to listen to like-minded media, we tend to shut out facts that challenge our own beliefs. It takes hard work to counter these tendencies.

Bush, who has also served as a Presidential Practice Professor at Penn, was joined on Zoom by Donna Brazile, a political strategist, author, and Fox News contributor; Julián Castro, the 16th U.S. Secretary of Housing and Urban Development and former mayor of San Antonio, Texas; Peggy Noonan, an author, The Wall Street Journal columnist, NBC News and ABC News contributor, and a past Penn honorary degree recipient; and Ashley Parker, a Pulitzer-prize winning White House reporter for The Washington Post, senior political analyst for MSNBC, and a Penn alumna.

Michael Delli Carpini, the former dean of the Annenberg School for Communication, and now the inaugural director of the Stavros Niarchos Foundation Paideia Program, which co-sponsored the Forum, served as the event’s moderator. He prompted questions to the panelists—who offered wide-ranging experiences—that touched on topics related to politics, journalism, social media, disinformation, the notion of “cancel culture,” and finding hope during such unprecedented times.

In discussing what he expects to see in the weeks leading up to the election, Bush said he senses it will be a “pretty volatile ride” but he insists the U.S. will see a massive turnout of voters. Indeed, Brazile, who’s a former Chair of the Democratic National Committee, said the enthusiasm to vote is unlike ever before.

Our politics is a mirror of our culture.

“I agree with Gov. Bush that this election is going to be won in the margins,” Brazile said. “That’s why it’s important, even during this pandemic, we find ways to canvas, and to talk to neighbors and to go out there and try to engage as many people as possible.”

When discussing the pressures that bubble up to attack opponents while running for office, Castro said he noticed while running as a Democratic candidate for president that voters weren’t as responsive to negative bouts aimed at President Trump. They instead wanted to hear and see solutions.

“They wanted to know what your plan was,” Castro said. “And I think that in this election that Joe Biden is doing well not only because so many people are voting against Donald Trump but also because they believe that he actually does have a plan, he has the experience, the wisdom, he’s been there before. … It’s the strength of the positive.”

Parker’s unique perspective as a White House reporter today, as well as a journalist covering the 2012 and 2016 presidential campaigns, showcased insight into the way the media landscape has changed under the current administration.

Interestingly, Noonan, who worked as a special assistant and speechwriter for President Ronald Reagan, noted how she doesn’t think President Trump would be “in the terrible fix he’s in” had he acted more presidential.

“To me he’s almost proof that decorum matters,” Noonan said, “that how you think and how you present yourself matters.”

The best way to preach civility is to practice it.

Bush said the “obsession about Trump,” though, misses the broader challenge we face as a country, where we are often caught in a bubble—sometimes due to algorithms—that allows for our views to be validated regularly. He did note, Trump’s particular handling, at least on the public leadership side, of the novel coronavirus allowed it to become hyper-partisan.

“Wearing a mask is now a political statement,” Bush said. “That’s the weirdest thing in the world. We’ve allowed ourselves to fall prey to some really dangerous things that have hurt our recovery.”

When discussing civil discourse, Brazile said “the best way to preach civility is to practice it.”

“Most Americans want racial justice,” she added later. “They want to see us come together. They want reconciliation. So in the aftermath of George Floyd, when we saw the peaceful protestors gathering, when people demanded that law enforcement work with their community, when we started to talk about what it would look like to have equal justice under the law, that was the moment when I thought our country could finally turn the page. And then, a tweet later, we condemn the protestors, we lift up the law enforcement, and we’re back to ‘divide and conquer.’ No, we need to bring our country together, we need to bring people in the room to sit down and we can have an honest conversation about how we can move forward.”

Castro, on the same subject, noted importantly the need to get to civil discourse and work productively together, but that it shouldn’t mean settling for the status quo.

Read conservative publications and liberal publications, watch Fox News and MSNBC. Then you can make your own decisions, but you’ll be best informed.

Delli Carpini, responding intuitively, mentioned, “Applied broadly, the idea of civility is often used to silence people who are justifiably angry. Civility doesn’t mean that you agree with everything that is going on in the moment.”

The intricacies of civil discourse were examined widely during several post-Forum TableTalk sessions, which took place as seven- to eight-person virtual breakout rooms on Zoom for anyone who was interested.

“In the TableTalk, someone brought up the point that the term civil discourse can be misleading,” said Aditya Bhati, a sophomore computer science major from just outside Minneapolis, Minnesota. “Civil makes it sound like it’s all peaceful and neutral, but discourse doesn’t necessarily lend itself to being neutral. But you can have civil discourse without being offensive. You have to if you want to get the most out of it.”

For Liam Theveny, a Vagelos Scholar from Media, Pennsylvania, he said the Forum, as well as the TableTalk, helped reinforce the importance of civil dialogue.

“Everyone recognizes it’s important but nobody really thinks about how to implement it,” said Theveny. “A lot of what we talked about was how to implement it into your personal life, challenging your own beliefs, being respectful of how you listen to people.”

Theveny took special note specifically at the very end of the Forum, when Parker, in response to Delli Carpini’s question about how we can get back to a point “where facts and truth matter,” explained the importance of seeking out a range of news sources, a “kaleidoscopic approach,” if you really want to understand the world.

“Read conservative publications and liberal publications, watch Fox News and MSNBC,” Parker said. “Then you can make your own decisions, but you’ll be best informed.”

When speaking of the issues that surround our current “culture,” Bush explained how he believes we’ll see a change likely to happen “from the bottom up,” noting how values have shifted for millennials and Generation Z in a way that “gives me hope,” he said.

In response to Bush’s sentiment, Sydney Nixon, a Paideia fellow and sophomore communications major from Philadelphia, said if we ever want to remedy political polarization, it really does matter what her generation—and those following her—do.

“It doesn’t matter what is done at the top, if as a society, just your average person, we can’t have conversations,” Nixon said.

Gutmann, who closed out the Forum by summing up its key components, explained how the panelists had “laid out the stakes” and how “it’s up to us to take their advice to heart, to mind, and to action.

“This is an opportunity to keep the conversation going,” she said.

Homepage image: In the midst of a historic presidential election, a worldwide pandemic, and the largest mass movement for racial justice in generations, this year’s Silfen Forum came at a pivotal time.